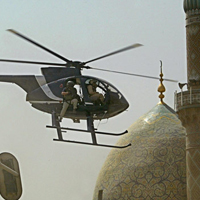 Raven 23 was a team of Blackwater employees who provided security in Iraq for U.S. government personnel. On September 16, 2007, a car bomb went off, and Raven 23 was called on to secure an evacuation of a diplomat. As a federal court described it later, “a shooting incident erupted, during which [some of the members of Raven 23] allegedly shot and killed fourteen [Iraqi civilians] and wounded twenty others.”

And, as legal battles go, what a firefight it is.

There’s been a Kastigar hearing, a direct appeal, a mandamus action, a judicial call for an Inspector General investigation into the State Department’s conduct in the case, a promised request for the government to pay attorneys’ fees for one of the members of Raven 23, posturing about new charges, and threats of motions for vindictive prosecution.

If you find yourself without that kind of time, here’s a blow by blow of some of the most interesting bits.

The government took statements from the members of Raven 23. These were taken after Garrity Warnings were given, meaning that the statements couldn’t be used later against them (here’s a bit of background on Garrity warnings if you’re not familiar with them).

The trouble is, those statements were leaked. As Judge Lamberth observed about these leaks:

If the Department of State and Diplomatic Security Service had tried to deliberately sabatoge this prosecution, they could hardly have done a better job. It is incredible the way these defendants were coerced into making statements to DSS agents. The impropriety of this was well settled law at the time. Even more egregious, though, was the leaking to the news media of the statements given. Yet it appears there has been no investigation of these circumstances and no one has been held accountable. Nor is there any reason to think anyone has learned a lesson from this fiasco or that any steps have been taken to avoid repetition.

Of course, no one reads an article in the press as closely as those involved in the story. So, not surprisingly, lots of folks who were witnesses in the case read the news accounts of the immunized statements of the members of Raven 23 who were charged.

The last big Kastigar hearing was in the Oliver North trial — they feel like very 80s proceedings. One wonders if the lawyers wear big hair or shoulder pads to such a hearing.

Here, after the Kastigar hearing (and it’s appeal) the government took the original prosecution team off the case, brought in a taint team to do a taint review to see what could go to a new, clean, team of prosecutors to prosecute the case, and also set up a number of filtering processes to work on grand jurors and witnesses to screen out anyone with taint of the prior, immunized, statements.

Procedurally, the folks from Raven 23 who were charged had a Kastigar hearing before Judge Urbina who dismissed the original indictment. That decision was appealed, and remanded, and is now before Judge Lamberth (Judge Urbina has retired from the bench and, as I hear it, is on a long and well-deserved motorcycle tour of the south).

Judge Lamberth denied a motion to dismiss the indictment because the grand jury was tainted. It’ll be fun to see what happens with the trial evidence.

A separate issue is brewing involving one member of Raven 23, Nicholas Slatten. Slatten is represented by Tom Connolly, one of the uber white-collar lawyers in DC, who is doing a nice job of playing for dropped balls in the case.

On the government’s appeal, the government conceded that Slatten wasn’t in the appeal — they were only raising the appellate issues as to the other folks who were charged. (this is all summarized pretty well in the D.C. Circuit’s later opinion)

So, when the D.C. Circuit decided the appeal, they didn’t decide anything as to Slatten.

A new indictment came. Connolly, on behalf of Slatten, moved to dismiss the indictment against his client because it was time barred. Judge Lamberth denied it. Connolly sought mandamus. He succeeded — the D.C. Circuit ordered that:

The federal government does not take kindly to losing.

The prosecutors filed a petition for rehearing in the D.C. Circuit, saying that it would be manifestly unjust for the D.C. Circuit’s prior decision to mean what it said, and for the government’s decision not to include Slatten in the appeal to have any effect on what the courts do.

Per Curiam, the D.C. Circuit slapped the government down, noting:

If there was a “miscarriage of justice” here, it was caused by the government’s inexplicable failure to reindict Slatten by the deadline set by the statute of limitations. But we cannot cure one such alleged miscarriage of justice by causing another – that is, by rewriting our mandate into something it was not in order to permit the government to charge Slatten after the statute of limitations has run.