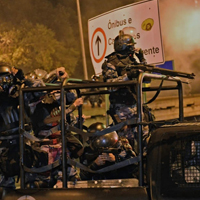 The U.S. private security contractor Academi has trained Brazilian police forces for the World Cup, according to an article published by journalist Patricia Campos Melo, of newspaper Folha de S Paulo. A group of 22 federal policemen as well as military policemen from different states were sent to the Academi training center in Moyock, in North Carolina, where they were taught anti-terrorism techniques in the largest private training center in the United States, that includes scenario facilities, four ship-boarding simulators, two airfields and three drop-zones. According to Lieutenant Ricardo Nogueira, of the Sao Paulo Police, the course -- named "Maritime Interdiction of terrorism" -- focused on the US experience in fighting terrorism.

But if you have never heard of Academi, don't worry. I am sure you know who I am talking about. Academi is the company formerly known as Blackwater, one of the biggest U.S. contractors in the early stages of the occupation in Iraq and Afghanistan under billion-dollar military Defense Department contracts. The company is accused of killing 17 Iraqis in a massacre in Nisour square in 2007 and of other misdeeds that led to two changes of its name in the past 5 years.

This is the same company that trained the Greek police forces for the 2004 Olympics in Athens, a prominent player in a security market that covers form the protection of sensitive infrastructure like mines in Africa, to secure compounds in Afghanistan, and of course security of mega events. Most of the employees are former soldiers, and the proximity with the U.S. government means that many sensitive tasks -- from training foreign forces to protecting foreign diplomats -- are third partied to them.

As Wikileaks documents showed back in 2010, the U.S. has vamped up its assistance on anti-terrorism for the World Cup because it saw a right risk of danger -- and also a great business opportunity for its companies. However, opaqueness surrounds this support; the total investment of the U.S. embassy in the training was only revealed now -- U.S.$ 2.2 million over the past 2 years. The deal was never publicized in full, and many questions remain. The Ministry of Justice is yet to explain for instance, how many courses were funded by the U.S., and who were the trainers -- U.S. military? Mercenaries?