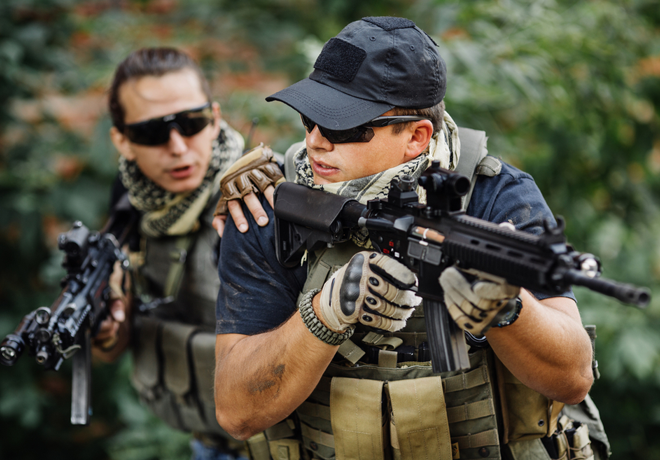 When you are a military soldier and firing at an enemy alongside several other soldiers, you don’t know if it was your gun, your bullet, that killed someone. “I’d rather not know,” says Stephen Friday, who spent 12 years in the British army before becoming a private military contractor (PMC) in 2008, working in Iraq and Afghanistan. The first time he ever shot somebody and knew about it “was as a PMC. The firefights were a lot closer, a lot more personal.” It was also more dangerous.

As a soldier, he had once come under fire for seven hours in Baghdad, but as a PMC, “I would say it was worse. You’ve got an army behind you when you're in the army. As a PMC, you can’t call for backup. You can’t call fire missions in. Certainly, my worst incidents were as a PMC rather than in the military.” He was shot at by snipers, survived a handful of roadside bombs and a grenade attack, and once a bullet lodged in the bulletproof glass of his vehicle, inches from his head. “There was a stage in 2009, for about three months, where we were probably losing guys every second or third day. It was violent and emotionally difficult.”

"Pulling the trigger for your country is one thing – quite another for a corporation. As a new report reveals how private military contractors have changed the face of conflict, they reveal how conflict has changed them.

Why did he do it? For the money, of course. There were periods when he could earn up to $10,000 a month tax-free (his contracts, like many PMCs, were deliberately set up to favor tax avoidance by restricting the amount of time he was in the UK). How would he feel about being called a mercenary? “I would find it offensive,” says Friday. “There were mercenaries out there. I say I did it for the money, which would align with being a mercenary, but certain stereotypes don’t apply to me.” We met at the small business he set up with the money he had saved before leaving the job in 2014. Despite first impressions – Friday is covered in tattoos, with a gruff voice, and is built like an armored personnel carrier – he seems surprisingly gentle and thoughtful.

He says there were important differences between himself and the stereotypical idea of a mercenary. He made an effort to integrate with local communities and became friends with Iraqi and Afghan colleagues with whom he keeps in touch. He would see the shocking behavior of other PMCs, particularly Americans, and think that at least he wasn’t like them. But it still comes down to money. “I can’t play the moral high ground,” he says, leaning back in his chair. Serving as a soldier in the army must be fairly easy on your conscience. Regardless of what you think of the foreign policy, if a vote of elected MPs decided to go to war, you are supposedly protecting British interests. There may be some kind of humanitarian element, however misguided. But when you are a PMC doing it for the money and working on behalf of a corporation, does that make pulling the trigger different? “Certainly. As I say, I can’t play the moral high ground card.”

This week, the charity War on Want released a report highlighting how UK firms dominate the vast private military and security industry, estimated to be worth somewhere between $100bn and $400bn (£69bn-£275bn) a year. The sector boomed in the aftermath of the invasion of Iraq, cashing in on outsourced operations and legitimized by the US government's large contracts. Many of today’s big companies are run by former senior military personnel, and the language is sanitized and corporate – risks and “opportunities” are “managed”, and there are “on-the-ground services.” There are “contractors” or “consultants”. There is rebranding: Blackwater, the infamous US private military corporation whose employees opened fire on Iraqi civilians in September 2007, killing 17 and wounding 20, has gone through two name changes.

“We did our first investigation into this ten years ago when it was going haywire around Iraq and Afghanistan,” says John Hilary, executive director of War on Want. “We noticed two things – the first was that private military companies were operating in a legal vacuum; there is no regulation of their activities. And second, as a result, some were involved in more and more dubious scenarios. Their security function had expanded into what we would consider private military operations, and they were being used almost as a mercenary force in conflict zones. Fast-forward 10 years, and the UK government has explicitly said it is not interested in any form of regulation [of private security companies], just self-regulation.” The Swiss government has banned any Swiss-based private military and security companies from participating in conflicts.

Hilary points to the hundreds of Colombian fighters deployed to Yemen to fight alongside the Saudi army and apartheid-era South African “soldiers of fortune” fighting Boko Haram in Nigeria. It is, he says, “a return to the idea of the ‘dogs of war that you can call in mercenaries to fight on whatever side. The thing about the mercenaries, which we know from memoirs of those who served in Iraq, is you have no chains of command, you have no control over what they do.” The action of these “armies,” he says, is “sowing disturbance and destabilization in countries which are already trying to fight off the threat of potential civil war.”

The private military and security industry is highly sensitive to criticism. The Security in Complex Environments Group was set up to develop standards for British security companies working abroad. It has representatives of giants in the industry, such as G4S and Olive Group, as well as the Foreign and Commonwealth Office, on its executive committee. Its director, Brigadier Paul Gibson – former director of counter-terrorism and UK operations – says that the private security world has changed since Iraq in 2004 and 2005, when some companies “were operating in quite a fast and loose way.” “There have been several processes to get to a position where responsible private security companies are properly managed, properly regulated and have human rights very much at the heart of the business model.” There is, he says, “a huge amount going on to ensure that people are operating in an appropriate, transparent manner and are accountable for their actions.” He says this includes the International Code of Conduct for Private Security Service Providers.

But it is voluntary. There will be some who decide not to adhere to it. How can you govern what they do? “I can’t. You’re always going to have rogue companies in any business sector. If a client is prepared to take a risk by using a private security company that is not regulated, that is a matter of the client. That is not how British private security companies are operating.” Would international legislation not be better? “That might be something that is reached at some point. I don’t think that is a sensible thing to do unless everybody, globally, is doing it. A couple of UN working groups are looking at this issue but are struggling to get consensus.”

I ask him if he understands why some people find private security companies distasteful or even abhorrent, and he pauses. “People have their views. Private security companies who are operating at the moment are providing a service to clients. Without that service, a huge amount of commerce and government business would not occur. Private security companies guard British ambassadors operating in very difficult parts of the world, helping the extractive industry conduct their lawful business, and ensuring that ships can cross the Indian Ocean without being interfered with by Somali pirates. I think that is all very laudable.”

John Geddes runs Ronin Concepts, which is based, like many private security companies, in Hereford, where the SAS has its headquarters (at least 46 firms employ former members of the special forces, according to War on Want’s report). He spent 22 years in the army, becoming a warrant officer in the SAS, before a PMC in Iraq in 2003. In the dramatic opening chapter of the book he wrote about this time, Highway to Hell, Geddes vividly describes the time a vehicle he was in with a British news crew was about to be targeted by insurgents in a blacked-out BMW. He fired on the car with his AK-47, killing the driver instantly.

His company runs some security operations, but it mainly trains contractors, and he has seen over 1,000 former military personnel go through his courses. What do they have in common? “They’re misfits who can’t or won’t fit into civilian life,” he says. They tend to be older. “Wars are fought by 18- and 19-year-olds. The average age [of a PMC] is the mid-30s or early 40s. In some companies, there is an upper age limit of 49.” He insists it’s not really about the money. “It’s the camaraderie, being with like-minded people, the guns, the adventure, the diverse activity. That’s why they do it.” Being in the army, for many soldiers, becomes such a huge part of their identity; when they leave, they are bereft. “I went through that myself. This kind of work is therapeutic. They just want to get back out there when they’re home on leave [from a contract].”

He says he doesn’t like the term mercenary. “You’re working for the right side of the fence most of the time as a PMC. Mercenaries work for everybody, they’ll go for the highest bidder on either side – that’s my perception of a mercenary. The main difference is that a PMC’s role is to protect and escape, rather than engage and attack.”

Friday agrees but says not every PMC – or company they work for – sees it like that. He says that companies take their style and practices from the military, but this also encourages a military attitude. “They’re taking boys out of the military and used to going on active missions, looking for trouble. They’ll still be in that offensive mindset [as a PMC], even though they should think defensively. Our job was to defend. Say you’re a client. We get attacked, chuck you in the vehicle and drive off as fast as we can – that’s a successful mission.” But the work would attract many former soldiers who want to see more action. “It was macho and egotistical, and that wasn’t my cup of tea. Everyone had to have the latest scopes, the latest bit of technology. Some people just wanted to look good with their kit.” There were contractors he describes as trigger-happy, looking for a fight. “And essentially, our job was to run the fuck away, not stay and get in trouble. Certainly, some companies were responsible for breaches of discipline or rules of engagement [and for encouraging] an offensive mindset, by making it so similar to the military.”

Friday gave up his job 18 months ago. He will be 40 this year and has spent nearly half of his life in some kind of military role, during which he has experienced – and inflicted – acts of extreme violence. As a private contractor, he says, “It was a good living, which set me up nicely. Whatever the risks were, it was worth it in monetary terms.” But there are other costs. He knew the longer he did it, one day his luck would run out, and he became tired and disillusioned. He thought the war should never have been started in the first place. “There are vast amounts of money to be made from private military contracting, and these people have their political interests, same as any corporation. War is money, war is profit.” Some names have been changed.