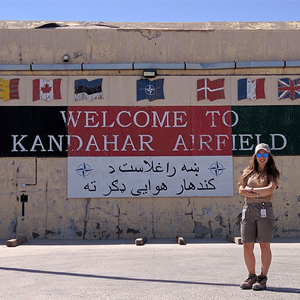 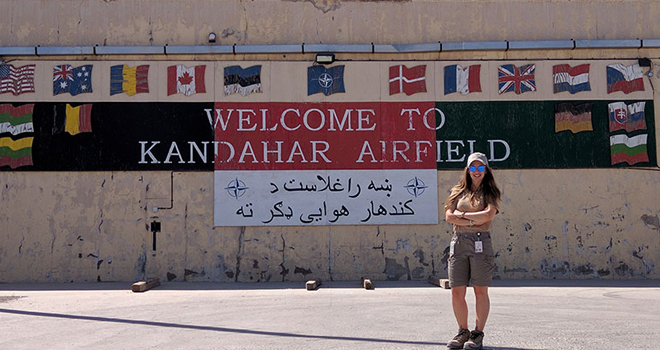 Andrea Martinez, Associate Technical Professional - Civil, traveled to Kandahar, Afghanistan to work on a KBR project based at a NATO airfield. Below is an account of her time on the project through her own eyes.

As a civil engineer, I have faced many challenging situations in my career but this opportunity offered me one of my biggest challenges to date. On my first day back in the office after the Christmas holidays last year, I was offered the opportunity to work on the KBR project based at NATO's Kandahar Airfield (KAF) in Afghanistan in the role of Building & Civil Engineering Technical Officer.

Although Kandahar is over 7,000km from my current home in the UK, I had absolutely no hesitation in accepting the proposed role and one month later, found myself boarding the flight ahead of an exciting three week experience.

Carrying my rucksack and a lot of enthusiasm, I was welcomed at Passenger Arrivals – better known as "Taliban Last Stand" – by a smiling Ronald Semsem, KBR's Senior Administrator, who escorted me to the KBR compound to meet the in-theatre management and my new team at KAF.

In view of the location, several security procedures were involved and following KBR's routine for each new visitor, I was given a safety briefing on how to follow the different procedures depending on each possible situation of risk. Only then did I truly appreciate the severity of the dangers I could encounter on the base, however by acknowledging and considering them, I made myself aware of the necessary actions that must be followed in the event of each.

These procedures together with KBR's Zero Harm campaign are actively encouraged by all personnel within the work place and on a daily basis with trainings, safety talks and drills that aim to make accident-free days an achievable outcome.

Once the induction was concluded and I had been introduced to my accommodation, Ronald took me for a tour around the facilities on the base. KAF is one of two international airports in Afghanistan and is one of the largest military bases with an impressive size of 16 square km and more than 15,000 people currently living on the base (previously more than 30,000). KAF could be compared to a small village where contractors and soldiers from all around the world live and work together.

KBR has been at KAF since 2006, working under contract for the UK military which supports NATO. KBR aids the airfield operations in the desert of Kandahar with arduous conditions and temperatures over 50C in the summer days (over 120F) and -12c (10F) in the winter nights - further demonstrating KBR's capability of operating in remote environments. KBR is in charge of the overall maintenance of the military base and supports all the works required such as engineering support services, upkeep of road and grounds, vehicle maintenance, airfield ground lighting, transport and pest control.

My tour finished with a visit to the Design Team where I would meet my new colleagues for the duration of my deployment. These included a Document Controller, a Civils Surveyor who keeps all the base maps up-to-date and available for NATO requests, an Estate Surveyor who undertakes all conditional surveys, a CAD Technician who is responsible for dig permits and underground scanning, and the Mechanical & Electrical Technical Officers. My specific role as the new Building & Civil Engineering Technical Officer consisted of developing a statement of work with engineering technical solutions for work orders requested by the client through KBR's Helpdesk.

Working on the Design Team at Kandahar is not dissimilar to working in the office at Leatherhead – US and British standards are followed for engineering solutions and projects are supported by a friendly team that is always willing to assist and from whom I gained knowledge and experience. KBR reflects its values and commitments for quality delivery of projects with the same level of passion in Afghanistan as it does in the UK.

In regards to life on the base itself, there is a seven day work week and with not many amenities as one would expect in a town of equivalent size, most people tend to invest their spare time in self-improvement activities such as undertaking distance learning or focusing on exercise. In addition to the gym within the KBR compound, there is a free NATO gym with many classes and a good selection of equipment, and a welfare room for KBR employees in addition to the friendly group of people that was always willing to meet up for socializing.

The culture of diversity that KBR promotes in offices and locations around the world extends to Afghanistan where diversity is actively embraced and effectively implemented. As a female on base, I was certainly in the minority but was treated as an equal peer by my colleagues who were always supportive and approachable.

I was very fortunate to be given the opportunity to revisit KAF for a longer period after my initial trip. During my second visit, I had the immense satisfaction of seeing a lot of progress being made on many of the works with which I was originally involved. Overall, my time at KAF was a fantastic professional experience in addition to being an intense personal life experience.

Contractor Life: Americans party in Erbil, Northern Iraq making the most of night near a war zone