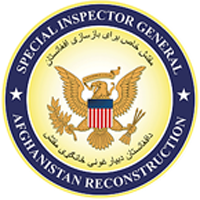 Special Inspector General for Afghanistan Reconstruction (SIGAR) investigation of large-scale corruption in Afghanistan led to the Department of Justice freezing more than $63 million in U.S. government funds, allegedly obtained through fraudulent means, located in bank accounts held in Afghanistan and in correspondent banks in the United States and abroad. The bank accounts are owned by Hikmatullah Shadman, an Afghan trucking contractor, who according to court documents allegedly defrauded the U.S. of more than $77 million by charging inflated prices for trucking contracts to deliver U.S. military supplies. These trucking contracts were allegedly obtained through bribes, kickbacks, and bid-rigging, according to court papers.

"We are determined to use all possible means to recover stolen taxpayer money. I'm proud of my agents, who worked closely with the Department of Justice on this groundbreaking achievement. This hits the criminals where it hurts. SIGAR will stop at nothing to follow this money trail wherever it leads," said Special Inspector General for Afghanistan Reconstruction John F. Sopko.

This is the first time the U.S. government has attempted to freeze and then seize funds held by an Afghan contractor in an Afghanistan bank, and was the direct result of SIGAR’s investigation. The funds were in Hikmatullah’s accounts in Afghanistan International Bank (AIB), but have since been transferred to other banks outside Afghanistan.

Key Facts from the Case

Security Contractor Sentenced to 4 years in Prison for Contract Fraud