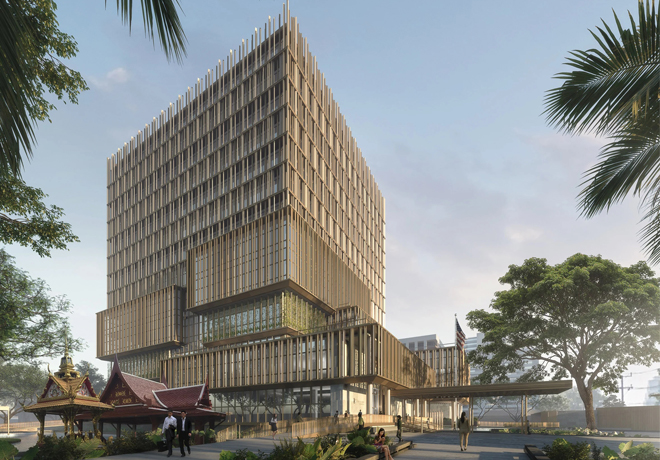 In August 2021, the United States began construction of a new annex on the existing U.S. Embassy Bangkok compound, which will support the continued expansion of U.S. - Thai diplomatic, security, and commercial relations and strengthen our ties with the Thai people.

Expected to be completed in 2025, the new building will modernize the U.S. Embassy’s platform for providing Consular services and conducting diplomacy and represents the importance of our longstanding alliance with the Kingdom of Thailand. In more than two centuries of friendship, the United States and Thailand have strengthened cooperation in all sectors, from bilateral trade to international law enforcement to public health. The new annex will house U.S. agencies currently located in different facilities across Bangkok, centralize our existing operations, and further strengthen bilateral cooperation.

The Bureau of Overseas Buildings Operations celebrates the groundbreaking of the new office annex for the U.S. Embassy in Bangkok. Chargé d’Affaires Michael Heath and Director-General Witchu Vejjajiva of the Department of American and South Pacific Affairs, Thai Ministry of Foreign Affairs were joined by other distinguished guests for the ceremony. The new project, located on the site of the original Embassy campus across from the current Chancery, will support the continued growth of U.S.–Thai diplomatic, security, and commercial relations and strengthen ties with the Thai people. The new building will modernize the U.S. Embassy’s platform for providing consular services and conducting diplomacy and will serve as a physical manifestation of our longstanding alliance with the Kingdom of Thailand.

SHoP Architects of New York is the design architect. The construction contract was awarded to B.L. Harbert International of Birmingham, Alabama. As a result of this project, an estimated $125 million will be invested in the local economy, and an estimated workforce of more than 2,000 U.S., Thai, and third-country nationals will be employed during construction.