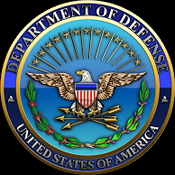 The Department of Defense (DOD) has long relied on contractors to support military operations. Contractors provide the U.S. military with weapons, food, uniforms, and logistic services. Without contractor support, the U.S. would currently be unable to arm and field an effective fighting force. DOD spends more on federal contracts than all other federal agencies combined. Understanding the costs associated with contractor support of overseas military operations could provide Congress more information upon which to weigh the relative costs and benefits of different military operations—including contingency operations and maintaining bases around the world.

DOD obligated $44 billion (12% of total contract obligations) for contracts performed overseas in FY2012. Although much of these funds were to support operations in Afghanistan and Iraq, $18 billion (40%) was spent to support operations in other parts of the world. DOD contract obligations for work performed overseas occurred primarily in the area under the jurisdiction of U.S. Central Command (59% of total), which includes the Iraq and Afghanistan areas of operation. DOD contractors working abroad performed their remaining work in the geographic regions that fall under U.S. European Command (25%), U.S. Pacific Command (11%), U.S. Northern Command (2%), U.S. Southern Command (1%), and U.S. African Command (1%).

Some analysts argue that to achieve its foreign policy objectives, the United States must bring together the resources of, among others, DOD, the Department of State, U.S. Agency for International Development (USAID)—and government contractors. DOD’s share of federal government obligations for contracts performed abroad has declined from a high of 87% in FY1999 to 73% in FY2010. Over the same period, combined Department of State and USAID contract obligations increased from 5% to 16% of all overseas obligations.

DOD divides its missions and geographic responsibilities among six unified combatant commands, including the U.S. Northern Command (NORTHCOM), U.S. African Command (AFRICOM), U.S. Central Command (CENTCOM), U.S. European Command (EUCOM), U.S. Pacific Command (PACOM), and U.S. Southern Command (SOUTHCOM). These commands do not control all DOD contracting activity that occurs within their respective geographic areas of responsibility. For example, Transportation Command (TRANSCOM) may contract with a private company to provide transportation services in CENTCOM. For purposes of this report, DOD contract obligations are categorized by the place of performance, not the DOD component that signed the contract or obligated the money. For example, all contractual obligations for work in the geographic location that falls under the responsibility of CENTCOM will be allocated to CENTCOM.

In FY2012, most of DOD’s contract work (87%) was performed in NORTHCOM. While NORTHCOM includes the Bahamas, Canada, and Mexico, the majority of this money is spent within the United States and its territories. DOD obligated 7% of the total contract work in CENTCOM, followed by EUCOM (3%), PACOM (2%), AFRICOM (0.16%), and SOUTHCOM (0.15%). When looking at contract obligations for work performed overseas, where DOD obligates contract dollars reflects DOD’s military operations and overseas permanent garrisoned U.S. troops. DOD contract obligations for work performed overseas went primarily to CENTCOM (59%), which includes the Afghanistan and Iraq theaters. DOD contractors performed their remaining work abroad in EUCOM (25%), PACOM (11%), NORTHCOM (2%), SOUTHCOM (1%), and AFRICOM (1%) (see Figure 4 and Table 1). CENTCOM and EUCOM combined represent almost 85% of all overseas contract obligations.

Of the top 10 countries where DOD contractors perform work abroad, 5 were in CENTCOM, 2 in EUCOM, 2 in PACOM, and 1 in NORTHCOM (see Table 2). 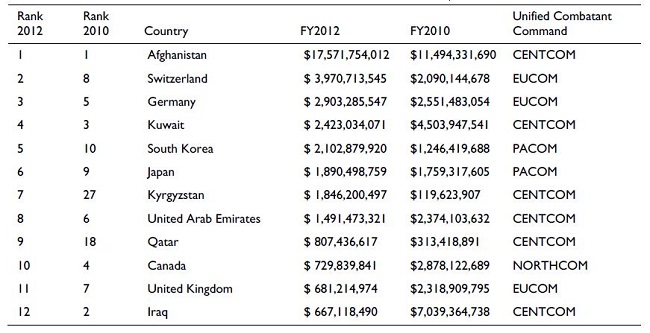 Operations in Afghanistan and Iraq

Figure 5. Contract Obligations in Iraq and Afghanistan Theaters
(in millions) 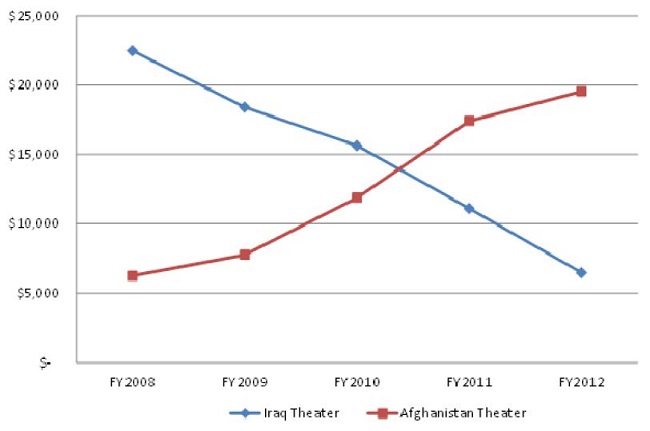 If military activity in the Afghanistan theater decreased to FY2007 levels, adjusted for inflation, DOD could save approximately $16.5 billion on contracting alone.

A number of analysts have argued that as a result of its larger budget and workforce, DOD often undertakes traditionally civilian missions because other agencies do not have the necessary resources to fulfill those missions. The Senate Foreign Relations Committee Majority, Discussion Paper on Peacekeeping, Majority Staff, April 8, 2010, states, “The civilian capacity of the U.S. Government to prevent conflict and conduct post-conflict stabilization and reconstruction is beset by fragmentation, gaps in coverage, lack of resources and training, coordination problems, unclear delineations of authority and responsibility, and policy inconsistency.” These analysts have argued that to achieve its foreign policy goals, the United States needs to take a more wholeof-
government approach that brings together the resources of, among others, DOD, the Department of State, USAID—and government contractors. Then-Secretary of Defense Robert Gates echoed this approach when he argued, in 2007, for strengthening the use of soft power in national security through increased non-defense spending. As Secretary Gates stated:

What is clear to me is that there is a need for a dramatic increase in spending on the civilian instruments of national security—diplomacy, strategic communications, foreign assistance, civic action, and economic reconstruction and development ... We must focus our energies beyond the guns and steel of the military, beyond just our brave soldiers, sailors, Marines, and airmen. We must also focus our energies on the other elements of national power that
will be so crucial in the coming years.

Contract obligations since FY2000 indicate a shift toward a more whole-of-government approach to achieving foreign policy objectives. DOD’s share of total government obligations for contracts performed abroad has trended down from a high of 88% in FY2000 to 74% in FY2012. Over the same period, combined Department of State and USAID contract obligations increased from 5%
to 15% of all U.S. government overseas obligations (see Figure 6). 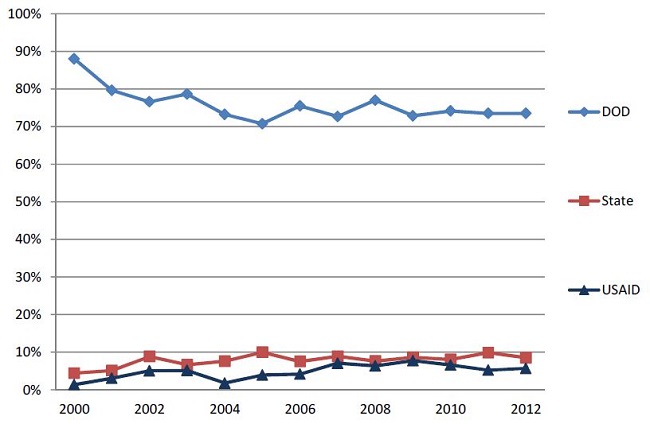 How Reliable Is the Data on Overseas Contract Obligations?

According to the Federal Acquisition Regulation, FPDS-NG can be used to measure and assess “the effect of Federal contracting on the Nation’s economy and ... the effect of other policy and management initiatives (e.g., performance based acquisitions and competition).” FPDS is also used to meet the requirements of the Federal Funding Accountability and Transparency Act of 2006 (P.L. 109-282), which requires all federal award data to be publicly accessible.

Congress, legislative and executive branch agencies, analysts, and the public all rely on FPDS as a primary source of information for understanding how the federal government spends contracting dollars. Congress and the executive branch rely on the information to help make informed policy and spending decisions. Analysts and the public rely on the data in FPDS to conduct analysis and gain visibility into government operations.

Data reliability is essential to the usefulness of FPDS. As GAO has stated, “[R]eliable information is critical to informed decision making and to oversight of the procurement system.” If the data contained in FPDS is not sufficiently reliable, the data may not provide an appropriate basis for measuring or assessing federal contracting, making policy decisions, or providing transparency into government operations. In some circumstances, unreliable data could lead analysts and decision makers to draw incorrect or misleading conclusions. The result could be the implementation of policies that squander resources and waste taxpayer dollars.

GAO and other analysts have raised concerns over the accuracy and reliability of the data contained in the FPDS-NG database. According to GAO, FPDS-NG often contains data with limited “utility, accuracy, and completeness.” Because of the concerns raised over the reliability of data, many analysts rely on FPDS-NG primarily to identify broad trends and make rough estimations. According to one GAO report:

DOD acknowledged that using FPDS-NG as the main data source for the inventories has a number of limitations. These limitations include that FPDS-NG does not provide the number of contractor FTEs performing each service, identify the requiring activity, or allow for the identification of all services being procured.

Officials from the General Services Administration, the agency that administers FPDS-NG, stated that data errors in FPDS-NG do not substantively alter the larger context of 1.4 million actions and billions of dollars of obligations entered into the system by DOD every year. Officials have also indicated that whenever possible and feasible, steps are taken to improve the reliability and integrity of the data contained in FPDS. For example, in FY2011, the Congressional Research Service found specific data reliability concerns regarding contracts listed as having been performed overseas that were actually performed in the United States. The CRS analysis of
contract obligations from FY2005-FY2010 found that more than $1.4 billion in contract obligations that were listed as having been performed overseas was likely performed in the United States.

DOD addressed the data error by reviewed past data and corrected coding errors. To prevent similar coding errors in the future, a rule change was implemented requiring agencies to adopt three-letter International Standard (ISO) codes when coding a particular country into FPDS-NG.

Defense Contractors: Too Big To Fail