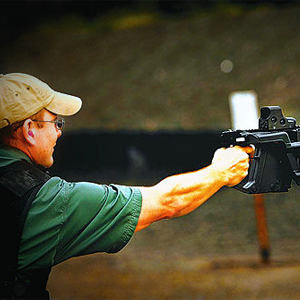 In August, the company admitted to lawbreaking that ranged from possessing illegal machine guns at its Camden County training grounds to attempting to land $15 billion in oil and defense contracts in southern Sudan while U.S. companies were barred from doing business there.

The company agreed to pay a fine of up to $7.5 million and entered a deferred prosecution agreement that will essentially expire after three years of good corporate behavior. Only the corporation admitted wrongdoing in that deal.

Thursday’s guilty pleas relate to one of the admissions from the agreement struck in August.

Blackwater used illegal methods of circumventing federal firearm laws when it acquired two Steyr machine guns in 2003 and never registered them as required by federal law. The company acquired 17 AK-47s and 17 M-4s, which it did not properly register with the Bureau of Alcohol, Tobacco, Firearms and Explosives. Instead, the company claimed that it was simply storing the guns for the Camden County Sheriff’s Office.

Blackwater was technically a private firearms dealer, and as such could not possess more than two fully automatic weapons, but law enforcement agencies can.

Tiny Camden County had just 12 full-time deputies at the time, and major violent crimes are a rarity. Blackwater also employed a high-ranking officer at the sheriff’s office as a trainer. After several name changes, the firm is now called Academi.

In recent years, Blackwater has been embroiled in numerous civil and criminal cases. The company agreed in 2010 to pay the State Department $42 million for matters related to the agreement struck in August. The company settled with the families of army officers killed when a Blackwater airplane flying without a flight plan crashed into an Afghan mountain.

Four former employees face weapons and manslaughter charges for a 2007 shooting in a Baghdad square that killed 17 Iraqis. Another guard pleaded guilty to voluntary manslaughter in that case. Two former Blackwater guards were convicted of manslaughter last year for the murder of two Afghans in 2009.

Blackwater was founded by Erik Prince, a former Navy SEAL whose father made his fortune manufacturing auto parts. Prince is a staunch conservative with extensive political connections in Republican and evangelical Christian circles. He built Blackwater into the nation’s biggest private trainer of the military and police at its sprawling compound in Camden and Currituck counties. The company provided security to diplomats in Iraq and Afghanistan, and held a number of classified contracts with intelligence agencies.

Prince’s primary customer was the U.S. government. According to USAspending.gov, Blackwater was paid at least $2.4 billion in federal contracts.

Prince, who has not been charged, has started a private equity investment fund, Frontier Research Group, which aims to provide security, logistical and management services to projects in Africa.