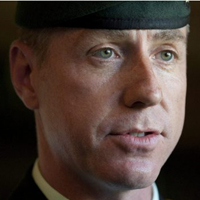 A former NATO commander in Afghanistan is behind bars in a Kabul prison accused of gun smuggling in a case that has again highlighted the dangers of doing business in the country. Daniel Menard, who left the Canadian army in disgrace after admitting a sexual relationship with a subordinate while on duty in Kandahar, was detained by Kabul police on January 10.

The Ministry of Interior has accused the former brigadier-general of being in possession of 129 rifles and 148 radios, all of which they say he was not licensed to hold. He had been working as the Afghanistan country manager for Garda World, a global private security company that provides services across parts of Afghanistan.

Garda World spokesman Joe Gavaghan, speaking from the company’s offices in Boston, told The Globe and Mail that the detention of Mr. Menard was apparently related to a question about the company’s licence in Afghanistan, and that the Canadian was not being held in a prison but in a holding facility and had not been charged with a crime.

He said Mr. Menard had been detained as he left a meeting with officials of the Ministry of Interior and that negotiations were under way to have him released.

His arrest and ongoing detention is the latest case in what some claim are an increase in the targeting of foreigners involved in private business.

Mr. Menard had previously served as the head of the NATO-led Task Force Kandahar beginning in late 2009 during which he had 2800 Canadian troops under his command. In May 2010 he was sent home when it was discovered the married father-of-two was having an affair with a woman subordinate.

He resigned from the army and was later fined for misconduct and obstructing justice after he had tried to get the corporal to lie about their sexual relationship, which was forbidden under Canadian military regulations.

Before the affair was discovered, Mr. Menard had also been fined for accidentally discharging his weapon while boarding a helicopter in Kandahar.

Yet, despite his missteps in the country, he returned to Afghanistan in 2012 to work for Garda World.

Mr. Gavaghan, the Garda World spokesman, said that was not true and that there had been confusion between Mr. Menard’s case and others. He said Mr. Menard was in custody over “an administrative misunderstanding” that the company hoped to resolve soon.

Jean-Bruno Villeneuve, a spokesman for the Canadian Foreign Ministry Wednesday said in response to a series of questions about Mr. Menard: “We are aware of a Canadian citizen who has been detained in Afghanistan. We stand ready to provide consular assistance, if requested.”

“Bullying, extortion, and illegal detentions have become the new way of forcing foreigners out of business who simply want to conduct business while also supporting the local economy,” said Kimberley Motley, an American lawyer who has been practising in Kabul for many years, usually on behalf of foreigners.

Ms. Motley said she could not comment on Mr. Menard’s case because he was not a client of hers but said it was common for police and prosecutors to pursue trumped-up charges in both criminal and civil cases.

“More often than not, these cases are woefully under-investigated, corrupt and a means to shake down foreigners. There’s nothing about rule of law about many of these cases. It’s more like illegal guerrilla warfare.”