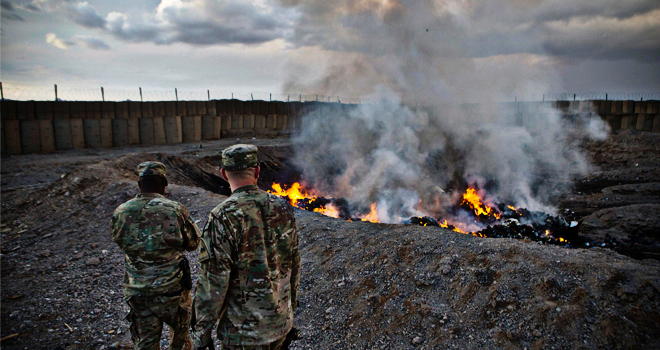 Hundreds of veterans and their families, who have spent eight years in federal court trying to prove that burn pits in Iraq and Afghanistan made U.S. troops sick, are worried they'll hit a legal dead end if a Maryland judge decides the company that ran the smoke-belching disposal sites can't be sued -- because it was working on behalf of the government.

This week the U.S. Supreme Court has rejected an appeal in which veterans sought to hold private companies responsible for their use of open-air burn pits that have been linked to scores of often fatal illnesses, from cancers to neurological damage.

According to Military Times The high court let stand an appellate court ruling that decided more than 60 separate lawsuits could not move forward.

“For nearly a decade, we have been working in the court system to secure justice for our veterans who have come home and suffered from debilitating diseases as a result of their exposure to burn pits in Iraq and Afghanistan," the statement said. "Over and over, KBR, a military contractor with the duty to handle waste on bases, did not do so with care. KBR operated burn pits that burned everything from plastics and human waste to car parts. We are disappointed that the Supreme Court declined to hear this case. We encourage all of those impacted and those who care about our veterans to contact their local representatives to push for change.”