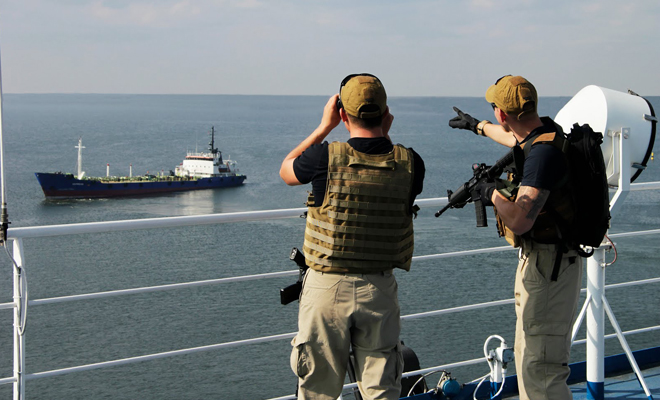 Fully operational and mission-ready, STRIKFORNATO is commanding and controlling assigned forces from their new JOC inside their Headquarters for the first time.

The redevelopment of our headquarters infrastructure and the overhaul of our Joint Operations Center has been a major project during my time at STRIKFORNATO, said STRIKFORNATO Deputy Commander, Rear Adm. Guy Robinson OBE.

“I am delighted to now see it up and running, delivering enhanced capability and underpinning our delivery of BALTOPS 20.”

This year marks the first time BALTOPS will be executed from STRIKFORNATO’s Headquarters in Oeiras, Portugal rather than from the U.S. 6th Fleet’s flagship, USS Mount Whitney (LCC20), which also serves as an Afloat Command Platform for STRIKFORNATO.

“As a Sailor, while I prefer commanding operations and exercises at sea, this capability in our headquarters provides an immediate and alternative option for us in line with our high readiness status,” Robinson said. “The strength and resilience of the NATO Alliance is further demonstrated by conducting exercises and operations from various locations depending on the circumstances.”

Although being afloat may enhance the ability to conduct mission planning, while also decreasing certain operational risks, the JOC at STRIKFORNATO enables NATO to demonstrate capability and interoperability with allies and mission partners.

“This provides us an additional command and control option either in the early stages of a developing crisis or in the event than an afloat command location is not available,” McLaren said.

This enhanced capability demonstrates STRIKFORNATO’s flexibility and ability to overcome limitations that might hinder other forces from reaching operational functionality.

“We have a deterrence mission and our improved capabilities ensure we are able to conduct joint operations in adverse conditions amid a global humanitarian crisis,” McLaren said.

Guns for Hire: Private Military Companies and their Status Under International Humanitarian Law