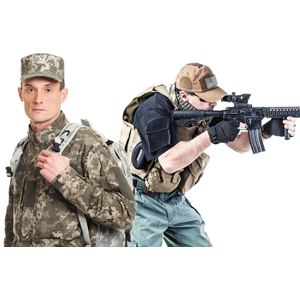 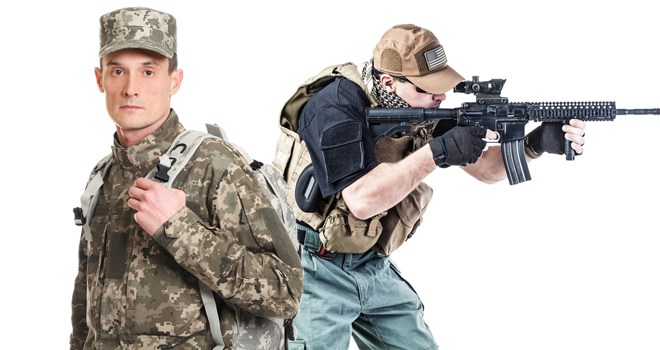 Although the United States isn’t a signatory to the U.N.’s “International Convention Against the Recruitment, Use, Financing and Training of Mercenaries,” the employees of private military companies aren’t mercenaries. PMCs supply support services and personnel whose jobs range from aircraft repair to medical and humanitarian aid. They also provide security guards who have parlayed their U.S. Army training into a job paying three to five times their Army pay.

Private military companies are as hesitant about providing information about their payroll as they are about naming their clients. The individual contractors who worked for PMCs rarely speak of it because their clients include organizations such as the CIA, and their contracts require silence. Average pay ranges between $300 - $750 per day or between $9,000 and $22,500 per month.

U.S. Army pay depends on an individual’s rank. The higher the rank, the greater the responsibility and the corresponding pay. A private, entering advanced individual training earns $1,468 per month. A sergeant with five years experience, possibly including combat, earns a base pay of $2,448 per month. A master sergeant with 20 years of experience may be only 38 years old and earns $4,189 per month in base pay. An infantry officer, after five years of service, probably has combat leadership experience and -- if a first lieutenant -- earns $4,349 per month. If that same officer holds the rank of captain, he earns $4,952 per month in base pay.

Because PMC personnel work outside the U.S., they can receive their pay through direct deposit to their bank in the same way Army personnel do. Some PMCs, such as those that provide aircraft maintenance, for example, don’t work in a combat-type situation. Instead, they may contract to foreign governments, where their personnel maintain the aircraft, both military and civil, belonging to the government.

PMCs don’t have the same duty schedules as the U.S. Army. Instead, the PMC tours of duty are based on their clients' requirements. For example, in Iraq, PMC contracts with the U.S. government may require that personnel leave the country after a period of several months. PMC personnel provide physical security for U.S. nonmilitary assets and personal security for U.S. government civilian personnel. Additionally, PMC personnel aren’t subject to military courts or orders and can resign their positions at any time, without repercussion.

The U.S. Army is the common starting point for career soldiers, both those who spend 20 years or more in the Army and those who become PMC field employees. If you prefer the more casual relationship and the higher pay that a PMC offers, you may be well suited to that work. On the other hand, if your paycheck is not an issue and you prefer the traditional military role the U.S. Army offers, stay in the Army.

CONTRACTOR LIFE: Confessions of a private security contractor
The secret World of Private Military Contractors exposed
Military Contractors coming home with PTSD, Where is the support?
Companies preparing to take on LOGCAP V task order
Defense companies respond to demand for contractors in Ukraine
How to get a job with an military contractor overseas
Share this with a friend