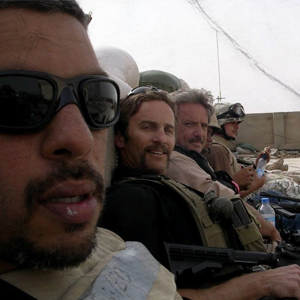 Absent on Wednesday in a Washington courtroom, where a federal jury entered guilty verdicts of murder and manslaughter against four Blackwater Worldwide guards in the killings of 14 Iraqi civilians, was a man synonymous with the United States’s infatuation with contractors. He is Erik Prince — billionaire, former Navy Seal, ex-CIA spy — the founder of Blackwater.

Prince is a man accustomed to drama. Numerous agencies have interrogated him. Members of Congress and reporters have hurled accusations against his company: murder, wrongful death, prostitution, negligence, weapons smuggling and racial discrimination. He has been called a “war profiteer,” a “mercenary” and a “right-wing crusader.” He sold the company and started a new one under a different name.

But he has never had to deal with something like this: four guilty verdicts against Backwater guards now facing decades, if not life, in prison — and a “stunned” team of defense attorneys.

Erik Prince, however, has never shed the ethos of a military contractor. Even now he thinks the United States should start enlisting contractors in the fight against the Islamic State. “If the Administration cannot rally the political nerve or funding to send adequate active duty ground forces to answer the call,” he wrote in a blog post this month, “let the private sector finish the job.”

Such commitment to contract warriors, despite a sketchy history of questionable behavior, underscores the stubborn reality of today’s wars. Despite the convictions of four Blackwater operatives, lawmakers have not moved on legislation that would provide clearer jurisdiction to prosecute crimes committed by private contractors or pushed for industry reform. With an army staffed by volunteers, contract firms such as Blackwater are an ingrained aspect of the American warrior class — whether there’s peace or not.

And now, with a renewed push to defeat the Islamic State in Iraq and Syria, analysts say President Obama is confronted with hard circumstances that may force a wider deployment of contractors to a region still haunted by the scandal. How can he dislodge the Islamic State without contractors if airstrikes don’t work and he won’t deploy American soldiers? Will he need to summon what ProPublica called the “shadow armies?”

“Iraq this time around is not going to be as big as it was before,” Roger Carstens, who has done contract stints in Somalia and Afghanistan, told the Daily Beast last month. “That said, this new war will present an opportunity for the companies that have a resident train and advising capability to contribute to this new effort.” Another U.S. military contractor in Iraq added: “I can tell you the contractor-expat community is abuzz thinking this will lead to more work. We expect a much larger footprint than [Obama] is showing right now.”

P.W. Singer, in an analysis in Foreign Affairs, tracked the birth of the modern private military industry back to the beginning of the 1990s. It owes its existence to three elements, he wrote: “The end of the Cold War, transformations in the nature of warfare that blurred the lines between soldiers and civilians, and a general trend toward privatization. … When the face-off between the United States and the Soviet Union ended, professional armies around the world were downsized. At the same time, increasing global instability created a demand for more troops.”

That global insecurity ultimately left the United States stretched between two protracted wars, forced to employ — at inordinate expense — hundreds of thousands of contractors in conflict zones across the globe. Foreign Affairs said it wasn’t a “coalition of the willing,” but a “coalition of the billing.”

In 2008, a year after the Blackwater fighters killed 14 unarmed Iraqis, the Pentagon employed 242,558 contractors in Iraq, Afghanistan, Somalia, Pakistan and Yemen, according to official estimates reported by the Daily Beast. In the past decade, the Wall Street Journal reported, the United States spent more than $200 billion on private contractors in Iraq and Afghanistan. And Mother Jones put the global sum even higher — at $385 billion since 2001 in contractor fees.

In all, it’s become something an addiction, analysts said. “You have a situation where the government has become dependent on contractors,” Allison Stanger, a political science professor at Middlebury College, told the Journal. “It’s a real quantum shift.” As of February, more than 5,000 contractors were operating in Iraq. “The traditional U.S. military role has been supplanted by civilians who are training and equipping the Iraqi military,” the Journal reported in February.

Though it’s unclear what role contractors will play in the war against the Islamic State, there’s a general consensus they will ultimately be in the fight. “There is going to be business,” one expert told the Daily Beast. “You could say these are shoes instead of boots on the ground.”

By: Terrence McCoy is a foreign affairs writer at the Washington Post.

Are military contractors heading back to Iraq?

Contractors in Iraq Seeking Immunity Beyond 2012