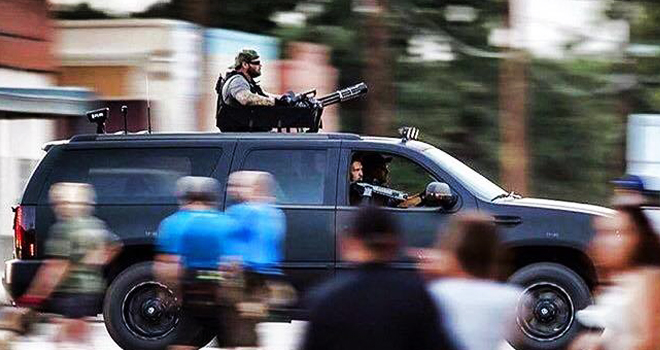 LOADOUT ROOM — The draw down and the cutbacks of the military have actually increased the need for armed security in both Iraq and Afghanistan.

Remember, there are a number of non-military projects that are being done in country and have no military value, such as construction of civilian-use airfields, roads, power and water treatment, just to name a few. These projects are still in a very volatile environment and the threat of violence against the workers and locals, in addition to sabotage to equipment, is an ever-present danger.

The military’s manpower and resources are limited to designated and specific posts, and unable to be physically present and provide the needed protection to all sectors 24/7. Private security companies like Triple Canopy, S.O.C, Osen-Hunter, Blackwater, Xe and Academi are able to meet that gap, and with an ample amount of veterans they have no trouble in filling that need.

In the beginning the majority (if not all) of the private security contractors (PSC) were former door kickers from C.A.G, SEAL Teams, and MARSOC/RECON. However, with customers requests expanding and the former either not leaving the military or wanting a regular 9-to-5 job made that task difficult.

It was then that executives decided to water-down the initial criteria. With the lure of making as much in a year in the military in just half the time, many veterans and some law enforcement personel have submitted resumes in hopes to land a very sought-after position.

It is a long and drawn out process, resumes are verified ( yes there are some who put down prior SF/NSW/MARSOC experience ), backround checks are conducted, passports applied for and the good old drug tests. This initial vetting process can take up anywhere from nine months to a year or more, and when it all comes back and IF they have passed the paper work drill, then they are accepted as a candidate for employment.

Then the second vetting process begins, which includes but is not limited to shooting proficiency, physical stamina and strength ( PT test ) and general “attitude”.

Surprisingly most fail the attitude part.

Some arrive looking as if they raped a 511 mannequin, have a chip on their shoulder and wont shut up about being ” In the shit, back when….” Later it’s found out that they never had any active combat experience, although having just been in theater counts. They then are informed that they did not follow the guidelines for training and are sent home.

For those that do posses the NSW/SF/MARSOC backround an offer for a position with the PPD (Personal Protection Detail) element is given. There is however a more difficult firearms and PT criteria that must be met.

When the completion of the vetting process is complete and the paperwork is in order, the new employee is offered a contract for a certain number of years, with a commitment of deployed days per year at a specific daily rate.

This is where the myths start and dreams are crushed.

Contractors are not mercenaries, they are not employed to carry out overt/covert operations. Contractors are a defensive tool on the broad security spectrum of things. They are either assigned to a PPD, if qualified, or a regular detail. Mercenaries, however, are hired by a government to enact a specific offensive goal for a price, as in Executive Outcomes during the ’80’s.

Which clearly is not the case today.

The basic Rules of Engagement or R.O.E’s for contractors are simple; do not engage a target unless threatened. With the tragedy of Scott Helvenston and the incident involving Ray Davis, R.O.E’s have been rewritten, rethought, reworked, re-everything to ensure the safety of the contractor while also ensuring the accountability of the customer.

Okay, so what are these guys doing over there if they are not raping and pillaging?

If not assigned to a PPD detail then the contractor more than likely stand a post, which may include radio communications, compound patrol foot/vehicle, I.D. checks, building entries, etc. not very exciting. The greeter at Walmart or the security guard at Target probably has more excitement.

Well that is kind of true, to a point.

The majority of the security force is made of local nationals who are THOROUGHLY checked and vetted before being trained. The training is done “boot camp style” and the force is run like company of soldiers. They are very well paid to look out for the safety of personnel and protection of equipment. They man the entry gates and access points, search local personnel, search vehicles and patrol outside the compound.

Contractors train and supervise the local guard force to the standard of the customer. There are armored vehicles and some areas do include heavy weapons, but that is case of a catastrophic event as in Khowst province in 2009. There are qualified snipers in the contranctor ranks but they are not employed for that purpose. The tools provided are for the protection of the workforce, and are not use in an offensive posture.

Contractors are issued equipment that rival some ISAF personnel. The parent company provides the basic tools and safety equipment in which the contractor may perform his duties while being protected.

Issued items include but are not limited too body armor and vests, medical pouch, military grade helmet, side arm and long range weapon usually an M-4. Most purchase their own gear out of pocket. They are not allowed to use or bring personal firearms, and are required to use only that issued by the customer.

Myth: Contractors are not bound by local, state or federal laws. It’s a lawless country and they have immunity.

Not quite. If there is an incident involving a contractor then an investigation takes place.

The customer is accountable to the local government and governing U.S. body. The customer does not want to lose or have their contract revoked for some stupid reason.

There are millions of dollars invested into a project, and contractors are considered a necessary evil. Past incidents like that of Justin Cannon and Christofer Drotleff left a very unsavory flavor for most. This where the label of mercenary-pirate-raider was coined. Now, there are guidlines and safegaurds for the customer to employ if need be.

More than likely, the customer will not spend an exorbitant amount of time or effort to “save” the contractor and will refer back to the parent company. The parent company will investigate and if found that the contractor violated any protocol, his contract will be revoked and all protections and services are terminated.

Which means if a contractor does something stupid and depending on the severity of the incident he is fired and sent home, and then possibly charged if warranted.

Myth: Contractors are paid too much for what they do and they work for corrupt officials and companies.

Depends on what is defined as too much. The daily rate is based on the bid for the contract.

The adage of “you get what you pay for” was proven correct in 2010 in Iraq. A private security company won a contract for security at a site outside of Baghdad. It paid it’s contractors only 5K per month with a commitment of a year in country, and the qualifications were so basic anybody who had seen a weapon in their military tour were offered a position.

The problem later appeared that there were more disciplinary issues and the numbers being sent home were mounting and not including those who decided to terminate their contract early, either moving to a better paying contract or it was not worth the time. They later lost the contract, and rebid with the daily rate at it’s current level.

Lessens learned from the past dictate the current policies and standards that are in place now, and they may even change in the future. American based companies are given very specific guidelines from U.S. Agencies to prevent corruption and exploitation. Licences, protocols, authorizations, accountability, inventories are reviewed constantly by these government agencies to a point where it becomes a nuisance.

There are many other myths and concerns about the private security contractor that are too many to cite and explain here, these are just a few but most popular.

Your average contractor is a patriot who has found employment that comes close to what he had in the military and is able to make a decent living. The comradeship and the brotherhood that is formed does have it advantages and flaws as was in the military.

You will run into guys you have not seen in years, form new friendships but there are some that slipped thru the crack as may occur with any position. Then there is always the drama and cat fighting, whining and complaining…just like you never left.