Special Inspector General’s report says, they don’t know what happen to the guns we gave to Afghanistan… 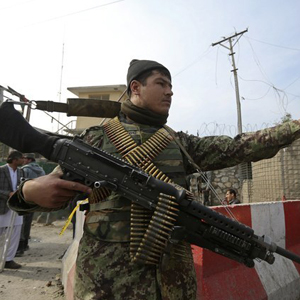 The United States government has delivered almost three quarters of a million weapons to Afghanistan’s army and police since 2004 but can’t track where those arms went, according to a new report by the Special Inspector General for Afghanistan Reconstruction, known as SIGAR.

“U.S. and Coalition–provided weapons are at risk of theft, loss, or misuse,” the report said. “We’re very concerned,” added John Sopko, the inspector general, “that weapons paid for by U.S. taxpayers could wind up in the hands of insurgents and be used to kill Americans and Afghan troops and civilians.”

The weapons distributed to Afghan forces include 465,000 small arms, the report says. But that number might not be accurate, an official with SIGAR said in an interview, because the data from the Department of Defense “is not very reliable.”

On top of the problems in accounting for the guns, the auditors found that Afghan forces have been sent far more rifles, machine guns, and grenade launchers than they need in the first place. For example, Afghanistan received 83,000 excess AK-47 assault rifles.

A 2010 law required the Pentagon to set up systems to track and monitor weapons being delivered to Afghanistan and Pakistan, and two America databases were established. But the audit says those databases, known as SCIP and OVERLORD, aren’t synchronized or linked, and tens of thousands of weapons have missing or duplicated information.

Once the weapons are transferred to the custody of the Afghanistan government, accountability is even worse, the report says. For example, at one Afghanistan national police garrison, the only inventory available was a partial, handwritten list of serial numbers, the audit says.

At an Afghan Army Central Supply Depot, according to sampling the auditors did, more then a tenth of the weapons appeared to be missing. The U.S. has long had trouble accounting for weapons it has sent to Afghanistan. In 2009, the General Accounting office said a quarter million weapons had sent there, but the serial numbers of 46,000 hadn’t been written down, making them virtually untraceable.

A Pentagon spokesperson, Major Bradlee Avots, wrote in an email to BuzzFeed on Sunday, “The Afghan government is responsible for the accountability of its weapons once they are transferred to their possession, as are all receiving nations of U.S. foreign military sales.” He said that the Pentagon is reconciling information in its databases. And he said the Defense Department is trying to find a way to make sure that before it gives new guns to Afghanistan, the country does inventory checks on the guns it has already.

10 Facts About U.S. Withdrawal from Afghanistan