Supreme Court to move foward with lawsuit against KBR, Inc. for burn pits it operated on bases in Iraq and Afghanistan 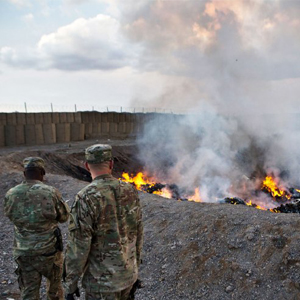 Recently, the Supreme Court found that lawsuits against the American contractor that operated the burn pits, KBR, could move forward. KBR had argued that it couldn’t be sued because it had operated the burn pits for the government. The Court issued no statement, but the lawsuits will go back to trial courts.

The high court denied a petition by the Houston-based company to consider arguments in cases that allege the contractor and former parent corporation, Halliburton, acted negligently while operating open-air burn pits in Iraq and Afghanistan and other facilities, resulting in death and illness of U.S. troops.

KBR had sought the court's opinion because it says the suits should be dismissed on the basis that, as a combat-support company, KBR should share the same immunity that shields the U.S. government from litigation over war injuries. KBR also says the judicial branch does not have authority to rule on political decisions made by the executive branch.

The burn-pit lawsuits, known as Alan Metzgar et al v. KBR Inc., are a collection of suits from across the country by plaintiffs who say they developed respiratory illnesses, neurological disorders, cancer and skin diseases from living and working near open-air burn pits in Iraq and Afghanistan.

They say the pits were used to incinerate refuse that included plastics, computer parts, medical waste and heavy metals, releasing toxins such as dioxin and volatile organic compounds into the air.

The following is a list of locations where burn pits allegedly operated:

Other or Undisclosed Countries: