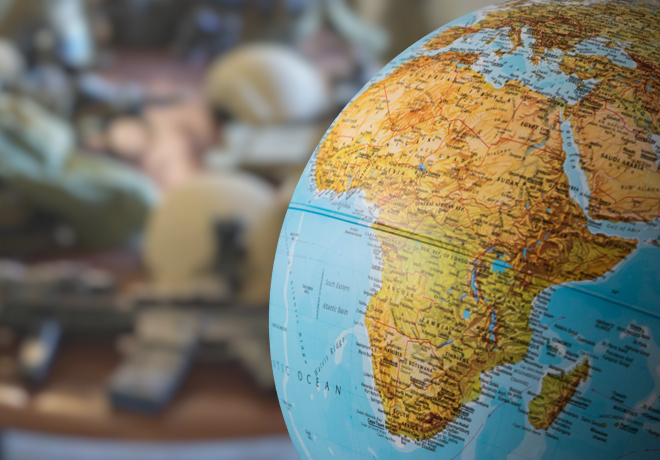 The Pentagon has begun a burst of spending in Africa, expanding its main base on the continent and investing in air facilities, flight services, telecommunications, and electrical upgrades as the U.S. Military deepen its footprint in a region with rising threats.

Hundreds of millions of dollars in expenditures, detailed in unclassified federal documents, demonstrate Africa's increasing importance to U.S. Military and counterterrorism operations like the war in Iraq has ended and American troops withdrew from Afghanistan.

By far the most significant expansion is occurring at Camp Lemonnier in the deeply impoverished nation of Djibouti, a sleepy backwater on the coast of the Gulf of Aden, just north of Somalia. The sprawling base, built out of a onetime outpost of the French Foreign Legion, has been the Pentagon's primary facility in Africa for a decade.

Defense officials last month awarded $200 million in contracts to revamp the base's power plants and build a multistory operations center, aircraft hangar, living quarters, gym, and other facilities on a sun-scorched 20-acre site next to the tiny country's only international airport (with which it shares a runway).

The projects are part of $1.2 billion in planned improvements over the next 25 years that will accelerate Camp Lemonnier's transformation from a makeshift installation where a few hundred Marines once slept in tents into an enduring 600-acre base that now houses about 4,000 U.S. Military personnel and civilian contractors.

"Africa is front and center now for the Pentagon, so that means Lemonnier is front and center," said Rudolph Atallah, former counter-terrorism director for Africa at the Defense Department and now chief executive of White Mountain Research, a security consulting company.

The changes come as U.S. officials grapple with the threat posed by Al Qaeda-linked militants in Somalia, Yemen and North Africa's impoverished Sahel region. The U.S. commando raids last month that nabbed a long-sought terrorism suspect in Libya and tried but failed to capture a senior figure in Somalia's Shabab militant organization underscore the Pentagon's growing focus on Africa, including an increasing reliance on elite special operations forces.

Though most of the troops at Camp Lemonnier are conventional forces specializing in training African militaries, several hundred special operations troops also are based there, occupying a compound with its own security perimeter. Officials declined to say whether Djibouti-based troops were involved in either raid last month, but the base has quietly evolved into what Pentagon planning documents call "the backbone" of covert missions across Africa and the Arabian Peninsula, and is one of the military's most important bases for drone missions in Somalia and Yemen.

Military officials declined to elaborate on the role of the special forces, citing security, but their numbers at Camp Lemonnier are likely to grow. Late last year, the first special operations rapid-response team was established at the base, made up of Green Berets from the Army's 10th Special Forces Group.

When the U.S. diplomatic mission in Benghazi, Libya, was attacked in September 2012, leaving four Americans dead, lawmakers criticized Pentagon officials for a lack of crisis-response capacity in Africa. But there hasn't always been consensus on the role of Camp Lemonnier, which U.S. troops began using in 2002 primarily as a base for civil affairs and humanitarian missions.

Now Pentagon planners see the base as the center of a constellation of U.S. military sites across Africa, including small facilities in Manda Bay, Kenya; Entebbe, Uganda; and the West African nation of Burkina Faso.

In September, the Pentagon awarded Houston-based Kellogg, Brown & Root a contract for support services at Manda Bay. Navy engineers recently extended the runway there — on a mangrove-covered island near Somalia — to allow it to handle larger aircraft, such as C-130 cargo planes.

In July, a Texas company won a $49-million contract to provide air support, including medevacs, cargo flights and air drops, across a vast territory comprising 19 countries, including those where a small team of U.S. advisors is helping in the hunt for Joseph Kony, leader of the Lord's Resistance Army militia. The aircraft will be based in Burkina Faso, according to contract documents, which say the flights could run through June 2017.

Ham described Camp Lemonnier as "a key location for national security and power projection." In addition to the 20-acre site to be occupied by conventional units, the Navy is building a $228-million special operations compound at the center of the base, near the site of a new aircraft logistics area. The elite units currently operate out of temporary facilities that "lack sufficient capability and capacity to meet growing requirements and increased staff," according to planning documents provided to Congress.

The new compound, which includes a two-story operations building, a three-story barracks, and a hangar to house two aircraft, will hold 700 personnel at capacity, the plans say.

Starting in 2006, when neighboring Somalia was taken over by Islamist clerics who were believed to be sheltering Al Qaeda militants, lawmakers and Pentagon leaders increasingly saw the utility of a forward base in Djibouti.

"The idea was a small footprint, but that has dramatically changed over time," Atallah said.

After a U.S. drone had a hard landing on the runway, Djiboutian officials demanded a halt to drone flights from the airport because it "interrupted business and made the Air Frances of the world nervous," said a congressional source familiar with the incident.

The U.S. military temporarily moved a growing fleet of Predator and Reaper drones to a former French Foreign Legion airstrip at Chabelley, about eight miles southeast of Camp Lemonnier. According to documents provided to Congress, the military has spent at least $13 million to upgrade the Chabelley airfield, including building a storage area for munitions to carry out "kinetic operations" — meaning drone strikes.

The Pentagon now pays $38 million annually to lease the base from Djibouti, a former French colony with barely 1 million inhabitants.

Privately, some military officials and lawmakers grumble about the cost, but even amid calls for tightening the Pentagon's budget, Congress has largely recognized the base's strategic value.

In a report accompanying the 2014 Pentagon budget, the House Armed Services Committee said it "believes that the national security interests of the United States are supported by the enduring presence at Camp Lemonnier."