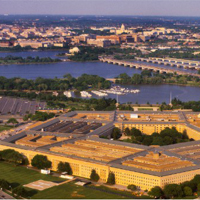 A year ago, "sequestration" was an ominous word in defense circles as the industry braced for what promised to be drastic across-the-board cuts in federal spending. But with this week's passage of the 2014 omnibus spending bill, everything looks -- well, everything looks pretty much the same as usual. That might not sound like news, but for an industry expecting to absorb a major blow as the federal cash spigot tightened, maintaining the status quo is actually a win. It spells a much more promising year for the defense industry than many would have imagined just a few months ago.

"The net-net is that sequestration cuts didn't hit, and that's positive for defense, and it looks like everything's moving forward," says Bill Ruttenbur, a managing director at CRT Capital Group. Programs ranging from submarine procurement to the F-35 Joint Strike Fighter to controversial Air Force drone fleets remain virtually untouched this year and next.

The $1.01 trillion overall budget allots the Pentagon $487 billion for baseline spending, plus another $85 billion to fight the war in Afghanistan under what's known as the Overseas Contingency Budget, or OCO. That's nearly $5 billion more than the Pentagon asked for. The budget agreement reached last month required the Department of Defense to spread around $25 billion in cuts as part of the previously planned sequestration reductions for fiscal 2014, which includes a $5.3 billion cut in procurement spending (down to $92.8 billion). So military contractors lost a potential $5 billion in federal procurement funds. But the Pentagon also has roughly $5 billion extra in discretionary dollars to spend in its overseas war budget through the OCO.

This is good news for the manufacturers of military technologies. Planning for the sequester forced even the biggest players in the defense sector to prepare for lean times. With the harshest sequester cuts now softened, the industry is in a place where a budget that simply maintains the status quo is far better than what it was expecting.