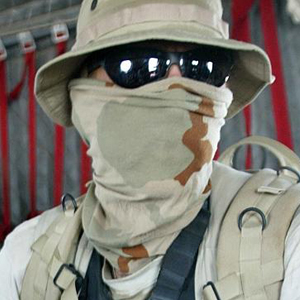 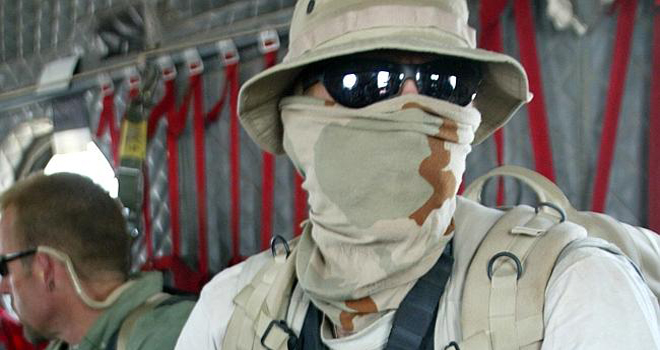 By Suzanne Kelly / CNN — "There are a lot of assumptions about contractors, and a lot of the assumptions are wrong." Those are the words of a private security contractor who asked to be referred to only as "Lloyd" for this story, because like most of his colleagues he is not authorized to speak to the media.

By Lloyd's count, he has spent some 1,000 days working in Afghanistan in the past four years. He, like many other well-trained military men, decided to leave his position as a Navy SEAL and take his chances finding employment in one of the hot spots around the world where highly skilled contractors were well-paid, and in demand.

Very few people outside the contracting industry really understood just what a private security contractor did before March 31, 2004. That was the day four American security contractors accompanying a shipment of kitchen equipment through Iraq were ambushed, killed, set on fire, dragged through the streets, and hung from a bridge before a cheering crowd in the city of Fallujah.

As shock subsided, questions arose. Who were these American men? If they weren't members of the military, what were they doing in one of the most volatile regions of Iraq?

All four men were private security contractors working for a company called Blackwater. At the time the company, like many others, was just getting on its feet as U.S. demand for security services skyrocketed. The government needed armed, well-trained security personnel in hostile territories. The new push started when the United States went to war in a CIA-led operation in Afghanistan in 2001. e CIA's early advance teams were not fully prepared for the pace of their own success. They quickly needed makeshift facilities to hold hostile enemy combatants and establish secure operating bases. The military wasn't yet in a position to help, so the CIA hired Blackwater.

It was a similar story when the U.S. invaded Iraq in 2003. A heavy presence of diplomats and reconstruction experts working in a hostile area meant they needed to be protected. Blackwater won a part of the contract to provide security services in the country. But being a private security contractor was a shady business, if not in the "legal" sense, in the "keeping off the radar" sense. Many of the contracts that were granted to companies such as Blackwater included clauses that severely limited the companies' ability to talk to members of the media. Contracting was, by the design of the U.S. government, secretive.

It was also designed to be nothing more than a cost-saving, stopgap measure. But as U.S. troops leave Iraq, there is an army of contractors staying behind, and 5,000 of them will be providing security services.

A contractor's experiences often don't draw a great deal of attention, unless someone is kidnapped, or has done something wrong. As Congress began to investigate the government's use of contractors several years ago, the issues that drew the most attention were the lack of clear rules governing contractors, and just how much money they were being paid. While it's true that money has always been a big draw, there are other parts of the job and lifestyle that rarely get reported.

"I remember when I got out of the military and took my first job with Blackwater," says Lloyd, "I thought I was going to be a millionaire, but after working five years in contracting, I can tell you I was chasing a carrot the whole time."

At the height of the boom in the years following the start of the Iraq war, private security contractors with military or law enforcement experience could make upwards of $750 a day. They would work for several months at a time and then come home before heading off on the next assignment. Many of the jobs didn't come with life insurance policies or medical coverage for their families back home.

"Layoffs and breaks between deployments have all affected my financial progress," says Lloyd. "It's two steps forward and one step back." He has a wife back home who is awaiting the birth of the couple's first child and says he worries because he has no pension. He reports that he has $30,000 in a 401(k) and another $15,000 in A Roth IRA. It's nowhere near the million he thought he would earn.

Another contractor, who worked for two of the larger private security companies before finding an office job back home, says it was a sense of duty after 9/11 that prompted him to leave his job as a SWAT team officer and go overseas. But the money wasn't bad, either.

"I got in so early that when I got into it the money was good," says Carter, who doesn't want to use his real name out of fear that he will have trouble getting hired for another contract if anyone knows he's spoken with CNN. "We were making $700 – $750 a day regardless of the contract. Some paid higher, some paid lower, but over time the company started paying less. They diluted the pool of skills. They lowered the qualifications 'cause they needed people. Six hundred dollars a day - pay dramatically dropped, then new companies came in - $500 day and it went from there."

Was it worth the money? "I had spent five months not eating, not sleeping, because you'd have death missions, seeing people get blown up all around me, going on dangerous missions where I could have died," says Carter. "I had so many close calls when we should have been killed, dozens of times. Small arms fire, some RPGs (rocket-propelled grenades), some grenade attacks on the vehicles. It didn't happen daily, but it was dangerous."

"I have even had people tell me that I'm not like they are, because I'm a contractor," said Lloyd. "As if a rocket attack isn't just as stressful for me as it is for them, because I make "so much money.'" As if (post-traumatic stress disorder) is only for soldiers and combat veterans, because I make so much money that I have nothing to be stressed about."

Like many private security contractors working in Iraq and Afghanistan, Carter moved between contracts, sometimes working on CIA tasks and sometimes on DEA contracts. For a while, he provided base security at one of the most sensitive CIA bases in the region. On other contracts, he often had to accompany reconstruction officials to meetings with Iraqi counterparts.

Carter recalls one night where he believed that there was a good chance that he wouldn't go home to his wife again.

"Here I am sweating bullets because I know the next day I have to take someone to a dangerous neighborhood, and it's me and another guy protecting someone and I'm scared to death."

"I had no benefits, no veterans services, no college fund, no disability insurance. There were some limited benefits from the company, but we got no veteran's credit. That was a big downside. We were getting murdered on medical insurance. Couldn't get any life insurance back then," recalls Carter.

There were contractors in the early days who saved up money, put their kids through college, or paid off the mortgage, and came home. It wasn't the kind of job that many people took on thinking they could do it for 10 years. But there was another big drawback once they were home: finding a job to match their skill set wasn't easy.

"I didn't bring home one skill I could use," says Carter, who has been home for three years now but is thinking seriously about going back.

"I still stay in touch with all of my friends who are deployed. Every day they are a part of something that matters. Every day, I sit behind a desk and do nothing. I used to be working along the border between Pakistan and Afghanistan doing operations that the military wouldn't do - and now I come home and I have to answer to some boob about what I'm doing. It's such an emotional and mental letdown. I'm literally rotting," says Carter.

But if he went back now, depending on where he went, there could be even more dangers. The U.S. is still negotiating with the Iraqi government about whether U.S. contractors will be granted any diplomatic protections under Iraqi law. It's been a point of contention since Blackwater guards shot and killed 17 Iraqis in a Baghdad traffic circle in 2007. Given the unwelcoming position of the Iraqi government toward U.S. contractors in light of that shooting, it's another risk worth weighing before packing the duffel bag.

The unraveling of Iraq may keep U.S. and NATO military mission in Afghanistan for at least several more years