Contractors in the “War on Terror”: Enabling Global Military Deployment 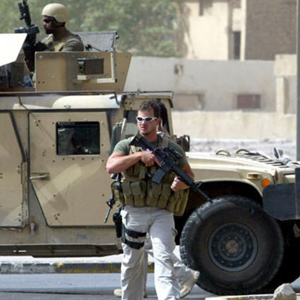 When asking about the role of private contractors in the so-called “War on Terror”, one has to be careful not to fall for the sensationalism which envelops much of the public debate on military outsourcing. This means keeping a focus on the structural and systematic rather
than the individual, anecdotal evidence of contractor involvement in military affairs.

It also means pointing out the large breadth of outsourced responsibilities, as the majority of contractors are unarmed and tasked with relatively mundane tasks unlike the image regularly conveyed by the press.

However, just because contractors do not regularly participate in “black ops” or other militarily more sensational operations, which are typically associated with war (and all the more so with the “War on Terror”) and disproportionately reported in the media, does not mean that they are inconsequential for the conduct of this war – quite the contrary. As this paper argues, what has begun as the “War on Terror” and is now a series of overseas contingency operations could in fact only go on in the global fashion that it did for almost ten years now because of the services provided by several hundred thousand contractors. In short, private contractors serve as enablers of this decade-old war, much like they have become enablers of most major Western militaries.

Codes of conduct for private military and security companies : the state of self-regulation in the industry