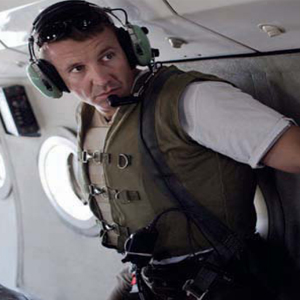 Erik Prince needs no uniform or medals to display his military credentials. Once you have seen his brisk walk, been on the receiving end of his vice-like handshake and looked into his steely eyes, you know this is indeed a man of military mettle.

But the former United States Navy SEALs member and co-founder of Blackwater, the private military company whose name is synonymous with controversy and the US-led wars in Iraq and Afghanistan, would like Chinese to think of him as just another civilian, but with something special to sell.

Prince, chairman of Frontier Services Group Ltd, listed on the Hong Kong Stock Exchange, is in China looking for customers-Chinese companies that are active in Africa or plan to be so. The group is backed by China’s state-owned CITIC Group and the Hong Kong investor Johnson Chun Shun Ko.

Prince says that unlike Blackwater, Frontier Services Group is not a security company, but a logistics company. Those who work for it are not involved in military matters, he says, but they do have the skills to operate in difficult places for their customers.

“Chinese are huge investors in Africa, they need resources and they do very big projects there. Our job is to help those projects go smoothly and predictably and on budget. Through the whole building of the Blackwater experience we learned how to operate in difficult places without any outside support, so we are taking that know-how to operate in Africa, to help companies achieve their goals, whether it is building a road, building infrastructure, a road, a dam, whatever, helping companies to achieve their goals in difficult places. “

Prince says the idea for the company came from Chinese businesspeople. After selling Blackwater in late 2010 he started the Frontier Resources Group.

“I started an equity fund to do some investment in Africa, and I was raising money in the mainland and in Hong Kong. Some people said, ‘It’s great, but what we really need is your help to sort out our logistics. That is what Frontier Services is about. It provides services, logistics, aviation, construction support, and we specialize in some of the most difficult places to operate, to support.”

Africa has amazing opportunities, but there are also things to be alert for, he says. It has criminal risks, the challenges of weather, rainy seasons versus dry seasons, muddy roads, floods, bugs, diseases and more. It has a few more problems than the rest of the world.

“Those are the kinds of challenges we work with, and Africa has a lot of them. We hope we will help build stability as Africa succeeds economically.”

When Chinese companies set up operations in Africa they take everything with them from China, he says.

“I think the gap is the know-how of how to operate in some difficult places. That is something we as a multinational company can bring to them and help them with.”

He says that because the company is only a few months old it has few Chinese customers but he sees that changing quickly.

Prince, 45, was born in Holland, Michigan, and now has seven children. He says his entrepreneurial spirit was greatly influenced by his father, who started with nothing and built a very successful business. With help from his father he was able to set up Blackwater, which was also very successful, he says.

He never intended to be a defense contractor, he says. But with big cuts in defense spending in the United States no one was focusing on training, he says, so Blackwater first started with that.

“I knew from my experience of the military what it needed, what the armed forces needed, and built better facilities for them to use, to provide the kind of training and support they needed, and when you come with better product, it is easier to sell it.

“Then after 9/11 we would get calls from people overseas asking, ‘Can you please come help us? Help us with security, with aviation, and logistics and construction.'”

The business grew rapidly, and he bought a small aviation company in 2003 that had one aircraft; six years later his company had 73. In its best years, between 2004 and 2009, the company employed 3,000 people and had dozens of subsidiaries worldwide, he says. Most of the company’s revenue came from governments.

“Blackwater was a government contractor. We started in training, and we got pulled into doing aviation, construction and logistics and security work, because the US government needed that help.”

Typical employees would have been those who had served in the US military, often in a special operation unit, or in special aviation units, he says.

Blackwater came under severe criticism after at least a dozen Iraqi civilians were shot dead in Baghdad, in September 2007. Three Blackwater employees were convicted in Washington last October on 14 counts of manslaughter. Another was found guilty of murder.

As the company continued to be embroiled in controversy, Prince finally sold it in late 2010.

“I built the company to serve my country, but when parts of the bureaucracy were attacking us, I said that’s enough and I want to do something else.”

Prince was in Beijing recently to promote his book Civilian Warriors, about Blackwater. There had been a lot of “noise” in the media about what the company did and did not do, he says.

“I wrote the book to set the record straight to let people know that the private sector is an important part at least – at least has been in the West – in the national security mission since the beginning of warfare.

“It is the private sector that can help by doing things with smaller footprints, much cheaper than the government can do sometimes. We can help bring a quicker conclusion to wars, so people can go back to their lives of training, farming and working.”

He is proud of what his company did, he says. The worst task was having to break the news to next of kin about the deaths of employees.

“The (Iraq) war was highly criticized in America. Some people love the work we did and some people don’t. But in those days we protected people we were asked to protect, and they are all alive.

Because of his new business, Prince wants to get to know China better. He has been on a nine-day cycling trip in the country with his family, and he has held several seminars with readers in China.

Prince says he hopes Chinese customers will regard his experience as evidence of what his company can do, particularly in being able to deal with the challenges clients may meet in Africa.