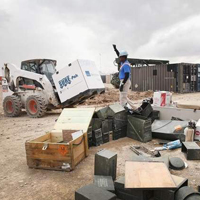 WASHINGTON — A U.S. House-passed Pentagon policy bill raises concerns about the Defense Department’s use of private contractors in Africa, citing problems encountered in Iraq and Afghanistan.

The lower chamber’s version of the 2015 National Defense Authorization Act (NDAA), passed May 22, contains a provision that would require the US comptroller general to deliver lawmakers a detailed report about US Africa Command’s ability to “plan, manage and oversee contractors.”

“While the challenges and deficiencies regarding the planning, management, and oversight of contractors in Iraq and Afghanistan have been well documented, and the department has taken several steps to address these challenges, the [House Armed Services Committee] notes that the challenges associated with contractor support for other types of operations in other regions could be substantially different,” states a report accompanying the legislation.

“In addition to broader concerns regarding planning, management, and oversight of contracts of this nature, the committee is concerned about the extent to which the Department may face operational contract support challenges in AFRICOM,” states the House report.

The HASC-crafted language comes as the White House is quietly shifting more US military and intelligence resources from Afghanistan and Pakistan toward North Africa. In another section, the same House report calls Africa “the front lines of the next phase of the terrorist threat.”

A senior administration official last week told reporters the White House’s new approach for fighting al-Qaida stretches “all the way to the Sahel,” adding the US will have “resources to allocate across the region.”

The provision would, if included in a final version of the bill, require a comptroller general study into “the processes AFRICOM uses to plan, manage and oversee contractors that support its military operations conducted in Africa.”

Members want the study to look at how much contractors are used to support AFRICOM operations, including the “appropriateness” of the practice. In addition, the lawmakers want to know the extent to which the command “depends on the Department of State to provide operational contract support to its activities in Africa and the potential challenges associated with this support.”

The report would be due to the congressional defense panel by April 15, 2015. The Senate Armed Services Committee passed its NDAA the same day. A report and bill text are not yet available, though an aide tells CongressWatch it has been filed and should be posted online “very soon.” source: www.defensenews.com