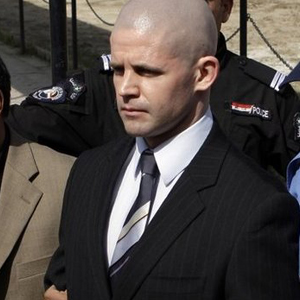 A security guard was shot dead by a colleague in Iraq after "banter" about their former regiments got out of hand, an inquest heard. Paul McGuigan, 37, and Australian Darren Hoare were murdered by former paratrooper Danny Fitzsimons in 2009. Another security guard, Kevin Milsom, told an inquest into Mr McGuigan's death how "good-natured" rivalry had descended into violence. Fitzsimons, from Rochdale, is serving a 20-year prison sentence in Baghdad.

During his trial in 2011, the former paratrooper told the Iraqi court he had been suffering post-traumatic stress disorder and claimed he acted in self-defence after a fight broke out.

He admitted killing Mr McGuigan, a former Royal Marine who had been living in Tameside, and Mr Hoare, in August 2009. Former soldier Mr Milsom was with Mr McGuigan and Fitzsimons on the night of the shooting. He told the inquest how just hours after Fitzsimons arrived in Baghdad, Mr McGuigan shared a drink with them. The meeting began with friendly rivalry about their former regiments, he said, but deteriorated and the pair squared up to each other.

Mr McGuigan then said to Fitzsimons: "Come on then, give it your best shot."

Fitzsimons threw a punch, hitting him in the face, and Mr McGuigan, originally of Peebles, Scotland, replied: "You wuss. You punch like a girl."

Mr Milsom said he then stepped in to calm things down, before returning to bed and falling asleep drunk.

He said he didn't hear the five shots that were fired that night but was woken in the morning by a colleague who said: "Your mate has just killed two of our blokes."

The inquest heard the men had been drinking, despite a no alcohol policy. There had also been banter about Fitzsimons' sexuality after he showed colleagues a teenage boy online and said he was his current partner, the hearing was told. The men had been working for British security firm ArmorGroup, part of G4S, based in the Iraqi capital's fortified Green Zone. Since the killings, the Fitzsimons family have questioned whether their son was well enough to be employed by the security firm.

Deputy coroner for Greater Manchester South, Joanne Kearsley confirmed she would be seeking evidence relating to the employment policies of G4S.