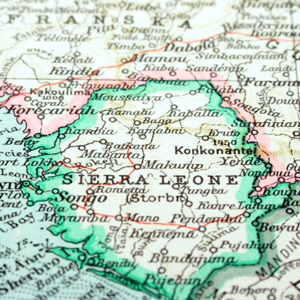 Dismissing private military contractors as mercenaries can be simplistic and misleading, as their deployment in Sierra Leone’s Civil War displayed. That the country is rebounding despite 2014’s Ebola crisis is due in part to the success of contracted firms neutralising destabilising rebel groups.

For impoverished Sierra Leone with its history of civil warfare, more unwelcomed news came with the Ebola plague that commenced mid-2014 and continued to claim victims and exhaust precious national resources through October and November. However, a central government stronger than any in decades was in place to deal with a public health emergency so deadly it possessed the ability to undermine national security. The existence of such an unprecedented degree of security (for Sierra Leone) can be traced to the timely employment of private military companies (PMCs) during the nation’s civil war two decades ago.

The modern PMC can be defined as an entity that offers services aimed at addressing security concerns through a variety of security engagements. From a legal perspective, a PMC is a corporate entity, while a mercenary group is not. Security needs — combined with the proliferation of PMCs post-Cold War — makes PMCs an inevitability in weak states such as Sierra Leone during its Civil War.

How PMCs came to the aid of post-civil war Sierra Leone represents an historical lesson with relevance to the country today, and to other countries whose militaries are incapable for various reasons – incompetency, underfunding, inexperience, corruption – of mustering the strength and resources to ensure a nation’s security. PMCs have been doing mischief in post-colonial Africa for decades. However, the Sierra Leone example offers a better experience.

PMCs bring a professional response to a chaotic situation

EO’s involvement in Sierra Leone’s civil War came at a critical point when Freetown had almost been taken by rebels. EO recaptured the diamond mines, leading to their reopening, and this success was followed by a ceasefire and elections. Sandline succeeded in bringing the resulting legitimate government back from exile.

Criticism of PMC involvement in regions such as West Africa is largely made under the Western notions about state security. This assumption that only government armies may legitimately fight internal opponents and that there is something inherently wrong about hiring private firms to stand in for government militaries might have been more credible if Sierra Leone had a functioning army that benefited from foreign government assistance.

At the time of PMC intervention in Sierra Leone, little foreign aid was available to Sierra Leone through secure channels due to what was described by the West as their own resource shortages and ‘donor fatigue’. The impact that EO and Sandline had in turning the war around in Sierra Leone should be apparent. What the PMCs managed to do that the government-led interventions did not was to secure and protect remaining infrastructure.

While still not scoring impressively on the UNDP Human Development Index relative to other African developing countries, as of 2013, life expectancy in Sierra Leone has risen to 45 years; the adult literacy rate has risen to almost half; the infant mortality has decreased to 114 per 1,000 births; and per capita annual income increased over twofold, to US$580. Most importantly, the country is not at war. There is still a long way to go, and Sierra Leone is not yet rid of its ‘resource curse’, but recovery and development are apparent.

The mines are operant, there is foreign direct investment from China, there are growing small and medium-sized enterprises and there is a considerable increase in the tourism (particularly ‘adventure tourism’) sector. None of this progress can be credited solely to PMC involvement in Sierra Leone. However, without such involvement, today’s brighter security situation (albeit currently and sadly under threat by the Ebola epidemic after such progress) would have been more difficult to have obtained.

Are military contractors heading back to Iraq?

The Rise Of Private Military Companies And The Ever-Changing Army

2 Responses to “How private military services saved Sierra Leone: The contracting out of military duties came from necessity but help ensure long-lasting security”