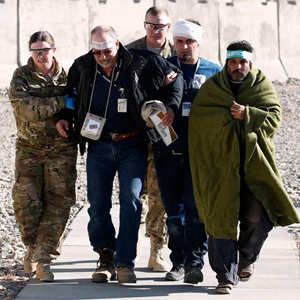 This is a war where traditional military jobs, from the mess hall cooks to base guards and convoy drivers, have increasingly been shifted to the private sector. Many American generals and diplomats have private contractors for their personal bodyguards. And along with the risks have come the consequences: More civilian contractors working for American companies than American soldiers died in Afghanistan last year for the first time during the war.

American employers here are under no obligation to publicly report the deaths of their employees and frequently do not. While the military announces the names of all its war dead, private companies routinely notify only family members. Most of the contractors die unheralded and uncounted — and in some cases, leave their survivors uncompensated.

“By continuing to outsource high-risk jobs that were previously performed by soldiers, the military, in effect, is privatizing the ultimate sacrifice,” said Steven L. Schooner, a law professor at George Washington University who has studied the civilian casualty issue.

Last year, at least 430 employees of American contractors were reported killed in Afghanistan: 386 working for the Defense Department, 43 for the United States Agency for International Development and one for the State Department, according to data provided by the American Embassy in Kabul and publicly available in part by the United States Department of Labor.

That trend has been growing for the past several years in Afghanistan, and it parallels a similar trend in Iraq, where contractor deaths exceeded military deaths as long ago as 2009. In Iraq, however, that took place as the number of American troops was being drastically reduced until their complete withdrawal at the end of last year. And last year, more soldiers than private contractors died in Iraq (54 compared with 41, according to Labor Department figures).

Qais Mansoori, 20, may have been among the uncounted. An Afghan interpreter employed by Mission Essential Personnel, a leading provider of interpreters in Afghanistan, Mr. Mansoori was killed along with five other interpreters when Taliban insurgents overran the military base where the interpreters were staying in the Mirwais district of Kandahar Province in July 2010.

That attack, typically, was scantily reported, since no soldiers died — although the death toll was 17, including an unidentified American civilian, according to Afghan officials and Mr. Mansoori’s friends and family.

Under the federal Defense Base Act, American defense contractors are obliged to report the war zone deaths and injuries of their employees — including subcontractors and foreign workers — to the Department of Labor, and to carry insurance that will provide the employees with medical care and compensation. In the case of foreign employees, which many of the dead were, survivors generally receive a death benefit equal to half of the employee’s salary for life; American employees get even more.

Mr. Mansoori’s brother, Mohammad, 35, an employee of a mine-removal charity in Afghanistan, said his brother’s employer, Mission Essential Personnel, promptly contacted the family and made a lump sum payment of $10,004, never mentioning the lifetime annuity to which they were entitled — which given Mr. Mansoori’s salary of $800 a month would have been closer to $150,000 over his survivors’ lifetimes. “I wish he was still here to look after my father and mother,” Mohammad Mansoori said. Their father is blind, and Qais Mansoori was his parents’ sole support, he said.

A spokesman for Mission Essential Personnel, Sean Rushton, disputed that, saying that his company has been making biweekly payments of $190 to Mr. Mansoori’s family and will continue doing so for 29 years. The $10,004 lump sum payment was a voluntary death gratuity paid by the company, Mr. Rushton said.

There were 113,491 employees of defense contractors in Afghanistan as of January 2012, compared with about 90,000 American soldiers, according to Defense Department statistics. Of those, 25,287, or about 22 percent of the employees, were American citizens, with 47 percent Afghans and 31 percent from other countries.

The bulk of the known contractor deaths are concentrated among a handful of major companies, particularly those providing interpreters, drivers, security guards and other support personnel who are particularly vulnerable to attacks.

The biggest contractor in terms of war zone deaths is apparently the defense giant L-3 Communications. If L-3 were a country, it would have the third highest loss of life in Afghanistan as well as in Iraq; only the United States and Britain would exceed it in fatalities.

Over the past 10 years, L-3 and its subsidiaries, including Titan Corporation and MPRI Inc., had at least 370 workers killed and 1,789 seriously wounded or injured through the end of 2011 in Iraq and Afghanistan, records show. In a statement, a spokeswoman for L-3, Jennifer Barton, said: “L-3 is proud to have the opportunity to support the U.S. and coalition efforts in Iraq and Afghanistan. We mourn the loss of life of these dedicated men and women.”

Other American companies with a high number of fatalities are Supreme Group, a catering company, with 241 dead through the end of 2011; Service Employees International, another catering company, with 125 dead; and security companies like DynCorps (101 dead), Aegis (86 dead) and Hart Group (63 dead). In all, according to Labor Department data, 64 American companies have lost more than seven employees each in the past 10 years.

The American dead has included people like James McLaughlin, 55, who trained pilots on a contract for MPRI and was killed by a rogue Afghan pilot who also killed eight American soldiers last April; and Todd Walker, Michael Clawson and James Scott Ozier, employees of AAR Airlift, who were killed in a helicopter crash in Helmand Province last month for which Taliban insurgents claimed responsibility.

For every contractor who is killed, many more are seriously wounded. According to the Labor Department’s statistics, 1,777 American contractors in Afghanistan were injured or wounded seriously enough to miss more than four days of work last year.

Marcie Hascall Clark began the Defense Base Act Compensation Blog after her husband, Merlin, a former Navy explosives ordnance disposal expert, was injured in 2003 while working for an American contractor. She and her husband have spent the past seven years fighting for hundreds of thousands of dollars in disability payments and medical compensation. “It was quite a shock to learn how little my husband’s body, mind and future were worth,” she said.