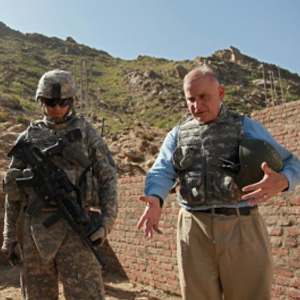 KABUL, Afghanistan — As the United States declares an end to its war in Afghanistan, the American-led coalition has taken steps to classify most of the indicators of how Afghan forces are faring after more than a decade of assistance.

For the past six years, the Special Inspector General for Afghanistan Reconstruction has been able to publicly release data on Afghan National Security Forces, including troop numbers, salaries, training, equipment such as aircraft, and infrastructure projects in its quarterly reports to Congress, SIGAR said in its latest report.

Not anymore. Effective this quarter, most of that information has been classified by the coalition.

“The classification of this volume of data for SIGAR’s quarterly report is unprecedented,” the latest quarterly report, released last week, contended. “The decision leaves SIGAR for the first time in six years unable to publicly report on most of the U.S.-taxpayer-funded efforts to build, train, equip, and sustain the ANSF.”

Military officials say the release of the information on how $65 billion in military aid has been spent could compromise security and give insurgents battling Afghan forces an edge.

“With lives literally on the line, I am sure that you can join me in recognizing that we must be careful to avoid providing sensitive information to those that threaten our forces and Afghan forces, particularly information that can be used by such opposing forces to sharpen their attacks,” U.S. Army Gen. John Campbell, who leads all international and American forces in Afghanistan as commander of the Resolute Support mission, wrote in a memo to SIGAR on Jan. 18 that was appended to the report.

The classification of data follows a series of moves by American officials to reduce public information about the increasingly unpopular war. Operational reporting on U.S. troops’ efforts ended in July 2013, and journalists trying to report on American forces through embeds have faced increasing hurdles.

SIGAR itself has contributed to a steady stream of less-than-favorable press coverage, using media savvy strategies and sometimes bombshell investigations to highlight example after example of U.S. aid going to waste in Afghanistan.

In the last quarter of 2014, which is documented in this latest report, SIGAR says it published the results of 17 investigations, including several financial audits that identified some $23.6 million in questionable costs. Other probes found little confirmation of any success in improving conditions for Afghan women, and that more that $300 million in U.S. funding for Afghan police salaries is based on potentially inaccurate data.

“With the departure of coalition combat troops and the concomitant drawdown of U.S. civilian personnel, Afghanistan has entered a new era. In these circumstances, U.S.-funded reconstruction will require more aggressive oversight than ever, even as carrying out that oversight becomes more difficult and dangerous,” John Sopko, the inspector general, concluded in the report.

But getting a clear idea of the results of America’s continued aid to Afghanistan will be constrained by the military’s move to prevent the American people from seeing the ANSF data, Sopko argued. Among the questions U.S. forces refused to answer publicly were queries about how $25 million allocated for women in the Afghan army has been used, details of contracts to improve ANSF literacy, and assessments of anticorruption efforts at the Afghan Defense and Interior ministries.

The decision to classify the material was met skeptically by many, including The New York Times’ editorial board, which opined that “it strains credulity to believe that insurgents would become more proficient fighters by poring over lengthy inspector general reports about an increasingly forgotten war.” Instead, the board members argued, it is American taxpayers who are prevented from being able to draw informed conclusions about the 14-year, $107 billion effort to defeat an insurgency, train Afghan forces and reconstruct Afghanistan’s war-torn infrastructure.

By Josh Smith Stars and Stripes

Former Employee of U.S. Contractor in Afghanistan Indicted for Bribery