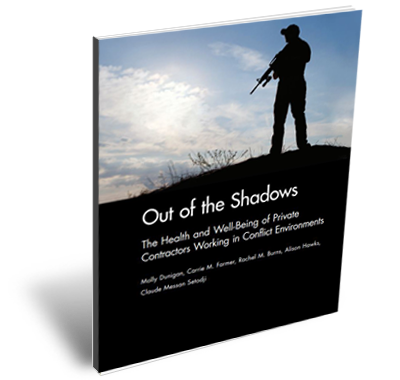 Over the past decade, private contractors have been deployed extensively around the globe. In addition to supporting U.S. and allied forces in Iraq and Afghanistan, contractors have assisted foreign governments, nongovernmental organizations, and private businesses by providing a wide range of services, including base support and maintenance, logistical support, transportation, intelligence, communications, construction, and security.

At the height of the conflicts in Iraq and Afghanistan, contractors outnumbered U.S. Troops deployed to both theaters. Although these contractors are not supposed to engage in offensive combat, they may nonetheless be exposed to many of the stressors that are known to have physical and mental health implications for military personnel.

RAND conducted an online survey of a sample of contractors who had deployed on contract to a theater of conflict at least once between early 2011 and early 2013. The survey collected demographic and employment information, along with details about respondents’ deployment experience (including level of preparation for deployment, combat exposure, and living conditions), mental health (including probable posttraumatic stress disorder, depression, and alcohol misuse), physical health, and access to and use of health care.

The goal was to describe the contractors’ health and well-being and to explore differences across the sample by such factors as country of citizenship, job specialty, and length and frequency of contract deployment. The findings provide a foundation for future studies of contractor populations and serve to inform policy decisions affecting contractors, including efforts to reduce barriers to mental health treatment for this population.

The Benefits of Working Overseas