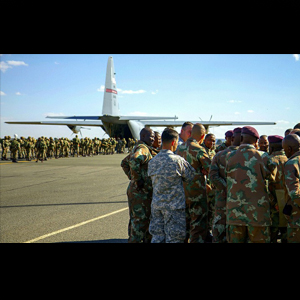 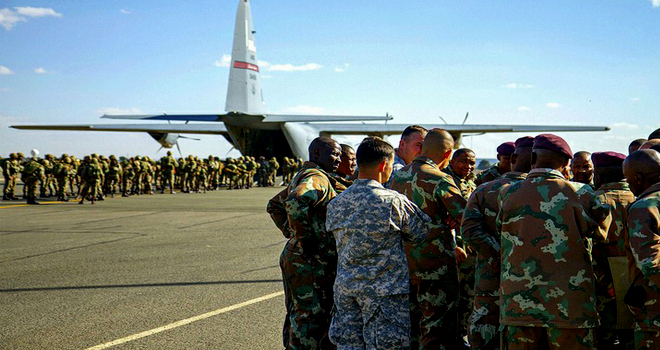 US Army Africa Command (Africom) wants private contractors to move military equipment and supplies from the US to Egypt and 55 other countries within its Area of Responsibility (AOR). This comes hard on the heels of a transport contract awarded by the US Army’s Transport Command (US-TRANSCOM) to Berry Aviation to provide to provide air transport service in support of operations in western and central Africa. This contract is reportedly worth $49 million.

A solicitation notice issued by Africom Surface Distribution Services (ASDS) from its contracting office in Vincenza, Italy, on August 5 seeks contractors who will provide “transportation services of intra-theatre cargo within the Africom Area of Responsibility (AOR) and Egypt.”

The solicitation adds: “The contractor shall provide all necessary resources including logistics support and management to perform surface transport and distribution of general cargo within all fifty five (55) nations of the Africom AOR and Egypt.

In the solicitation document, Africom says materials to be transported, “although normally general in nature will not include sensitive cargo but may include hazardous materials.”

The solicitation notice adds contractors will not be required to transport classified equipment and materials, gunpowder, ammunition or military weapons and explosives.

It also states the successful contractors will not be required to move military tanks, self-propelled armoured combat vehicles with weapons, aircraft and spacecraft including satellites, radar or radio devices for remote control of weapons and equipment.

These developments come when at least one American military watcher, Nick Turse of TomDispatch.com, maintains Africom is involved in the A to Z of Africa.

“They’re involved in Algeria and Angola, Benin and Botswana, Burkina Faso and Burundi, Cameroon and the Cape Verde Islands. And that’s just the ABCs of the situation. Skip to the end of the alphabet and the story remains the same: Senegal and the Seychelles, Togo and Tunisia, Uganda and Zambia. From north to south, east to west, the Horn of Africa to the Sahel, the heart of the continent to the islands off its coasts, the US military is at work. Base construction, security co-operation engagements, training exercises, advisory deployments, special operations missions and a growing logistics network, all undeniable evidence of expansion—except at US Africa Command,” he wrote.

Giving the official line Turse goes on: “To hear Africom tell it, US military involvement on the continent ranges from the miniscule to the microscopic. The command is adamant it has only a single ‘military base’ in all of Africa: Camp Lemonnier in Djibouti. The head of the command insists that the US military maintains a ‘small footprint’ on the continent. Africom’s chief spokesman has consistently minimised the scope of its operations and the number of facilities it maintains or shares with host nations, asserting only ‘a small presence of personnel who conduct short-duration engagements’ are operating from ‘several locations’ on the continent at any given time”.

He quotes Colonel Tom Davis, Africom director of public affairs, as saying: “Other than our base at Camp Lemonnier in Djibouti, we do not have military bases in Africa, nor do we have plans to establish any”. Davis admitted the US has temporary facilities elsewhere. . supporting much smaller numbers of personnel “usually for a specific activity”.

Another solicitation notice (HTC711-13-R-R016) issued in July seeks dedicated fixed wing service for the deployment and extraction of US military personnel involved in operations in the central African region.

It specifies contractors must be able to transport personnel and willing to carry hazardous cargo including ammunitions for small arms, signal flares, smoke grenades, blasting caps, rockets, mines and explosive charges in the central African theatre of operations.

“The contractor will be asked to routinely take off and land on improved and unimproved dirt airfields of a minimum of 1 800 feet in length to support resupply and personnel transportation requirements,” part of the solicitation note reads.

It said routine locations involved in the operations could include airfields such as Entebbe in Uganda, Obo and Djema in the Central African Republic. The operations will also support the training of counter-narcotics law enforcement agencies from Kenya, Ghana, Nigeria, Tanzania, Niger, South Africa, Burkina Faso, Uganda, Togo, Guinea and Mali.

Apart from these developments the US Military has been supporting construction all over Africa for its allies.

In addition to creating or maintaining bases and engaging in military construction across the continent, the US is involved in near constant training and advisory missions. According to Davis, the command is slated to carry out 14 major bilateral and multilateral exercises by the end of this year. These include Saharan Express 2013, which brought together forces from Cape Verde, Cote d’Ivoire, The Gambia, Liberia, Mauritania, Morocco, Senegal, and Sierra Leone, among other nations, for maritime security training; Obangame Express 2013, a counter-piracy exercise involving the armed forces of among others Benin, Cameroon, Cote d’Ivoire, Equatorial Guinea, Gabon, Nigeria, Republic of Congo, São Tomé and Príncipe, and Togo; and Africa Endeavour 2013, in which the militaries of Djibouti, Burundi, Cote d'Ivoire, Zambia, and 34 other African nations took part.

Workers protesting work force cuts at US base in Africa