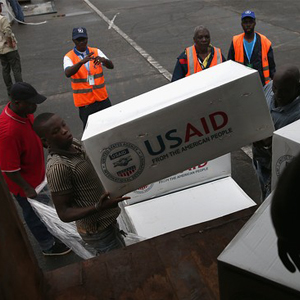 USAID transported the large shipment of PPE to Liberia on two charter flights from the United States. Since the first cases of Ebola were reported in West Africa in March 2014, USAID has expanded the pipeline of medical supplies and critical commodities to the region, airlifting more than 390 metric tons of cargo. This includes 140,000 sets of PPE, 4,400 cots for Ebola patients, water treatment systems and tanks, and more than 2,200 rolls of plastic sheeting to be used in the construction of Ebola treatment units (ETUs).

“The United States is committed to ensuring that healthcare workers have the resources needed to safely do their jobs and save lives,” said USAID DART Leader Mia Beers. “To that end, we and the international community are making it a priority to supply Ebola treatment units with the critical commodities needed to operate.”

The United States is currently in the process of constructing 15 ETUs in Liberia; U.S. support for ETUs goes beyond construction and includes funding healthcare workers to run the ETUs, bringing in materials—such as plastic sheeting and gravel—to build them, providing generators and fuel to power them, and offering logistical support to supply ETUs with medical equipment and commodities to keep them running. In total, the United States will be providing support to 20 of the currently planned and/or operational ETUs in Liberia.

In addition, the U.S.has provided trainingforhealthcare workers, supported 65 safe burial teams now working in every county in Liberia, helped to more than double the country’s lab capacity, and supported aggressive social outreach and Ebola education campaigns. Total U.S.humanitarian assistance for the Ebola crisis now exceeds $703 million, yet the continued success of the overall U.S.response depends on a well-funded strategy. This is precisely why President Obama has requested $6.18 billion in emergency funding to enhance U.S.efforts to urgently address this crisis, and to meet the longer-term recovery and prevention needs in West Africa.

The Future of Overseas Contingency Operations in Afghanistan