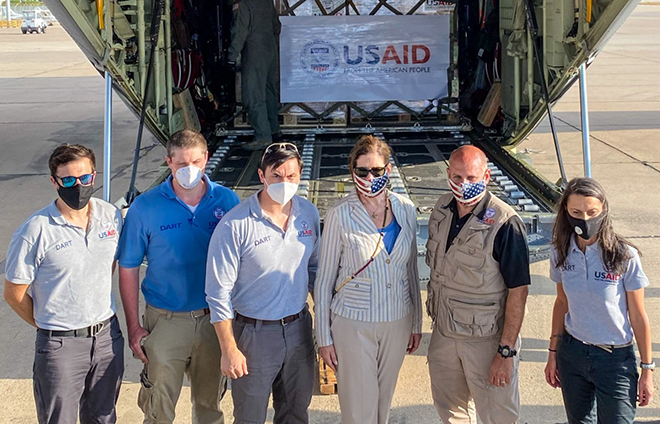 The DART comprises 17 disaster experts from USAID who are assessing the situation, identifying priority needs to scale up assistance inside Ukraine, and working with partners to provide rapidly needed assistance to communities affected by the conflict.

Prior to today’s attacks, USAID had already been working extensively with partners to adapt existing humanitarian programs where possible and provide rapid response funding to ensure that partners can quickly scale up assistance as a result of increased needs. This includes contingency and preparedness efforts to increase funding, staffing, program flexibility, and stockpiles of supplies for a range of scenarios including large-scale displacement.

Working with partners on the ground, USAID has continued to provide life-saving humanitarian assistance in the areas that can be reached. With widespread attacks targeting civilian infrastructure and urban areas, potentially affecting millions of Ukrainians, USAID anticipates that access challenges experienced to date will only grow. The United States continues to be gravely concerned about the likely widespread impact on civilians, including Ukraine’s most vulnerable populations.

With the conflict entering its eighth year, 2.9 million people in Ukraine were already in need of urgent humanitarian assistance and nearly 1.5 million people were already displaced before Russia launched its full-scale assault this week, and heavy fighting in eastern Ukraine and beyond is driving thousands more people to flee their homes. Now, with average winter temperatures below freezing, additional humanitarian aid is even more critical.

The United States is committed to supporting the Ukrainian people and is one of the largest donors of humanitarian assistance in Ukraine. We will continue to provide assistance as needs continue to rise. Since the conflict began, the United States has provided more than $351 million to vulnerable communities across Ukraine. This includes food, safe drinking water, shelter, emergency health care, and winterization services to communities affected by ongoing fighting.

USAID continues to support the people of Afghanistan
State Department budget for USAID in 2022
CONTRACT AWARD: $151,434,777 to provide Intel and IT support in Poland, Afghanistan, Iraq, Niger, th...
Contract Award: $23,023,786 provide engineering and security support in Poland
Americans working at the U.S. Embassy in Russia told to leave ...again
CONTRACT AWARD: $177.5M task order on USAID contract for Humanitarian Assistance Worldwide
Share this with a friend