CONTRACTOR LIFE: A Guide to Wintering in the South Pole – Antarctica 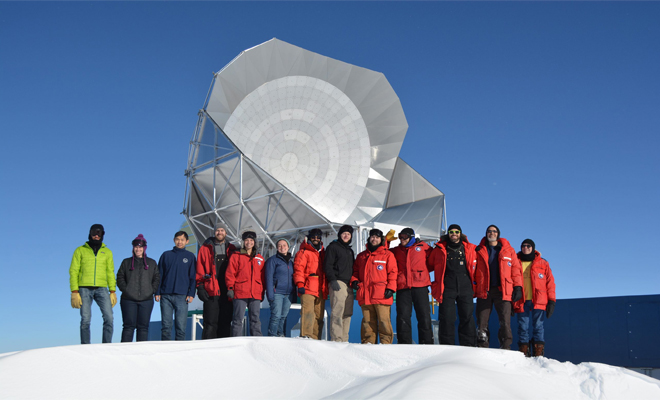 The last big plane left the Amundsen-Scott South Pole Station on Feb. 14. Of the 150 scientists, technicians, and support staff, only 33 men and eight women remained for the winter: six months of darkness, no arriving supplies, average temperatures of -76F. Also: no Wi-Fi or cell phone service. At the South Pole, iPhones become expensive alarm clocks and music players. Sunrise comes on Sept. 21.

Sitting on the ice—as well as buried one mile beneath it—are telescopes and other instruments gathering data to help answer questions about the changing climate here on earth, as well as the origins of the universe. The first direct evidence of cosmic inflation—the idea that the cosmos experienced exponential growth in its first trillionth of a trillionth of a trillionth of a second—came from a telescope at the South Pole called BICEP2 (Background Imaging of Cosmic Extragalactic Polarization.)

South Pole Telescope: It’s the largest conventional telescope at the South Pole, with the main reflector that’s 10 meters in diameter. The telescope is above ground and accessible. “That means we do everything from grease the gears and change the oil to maintaining our computer network and preliminary data analysis,” says Huang. The telescope is used for cosmic microwave background astronomy, including the study of high energy physics (that would be the Big Bang) and the formation of galaxy clusters.

IceCube Telescope: Most of the telescope is embedded in Antarctic ice 1.5 kilometers to 2.5 km below the surface. It covers one square km on the ice’s surface. The instrument observes neutrinos, the very small subatomic particles with barely any mass that come from the sun, cosmic rays, radioactive decay, and exploding stars. They could help us understand dark matter, which physicists believe makes up 25 percent of the universe.

IceCube Lab: “This sits on the center of the telescope about a kilometer from the station itself,” says Rees. “It holds about 150 computers that collect data from the roughly 5,500 light detectors buried in the ice. [The light is created when a neutrino interacts with the nucleus of an atom in ice.] About 100 of the computers are custom data-acquisition machines that include custom hardware to communicate with the light detectors. The rest are off-the-shelf Dell (DELL) servers.”

Each day the Ice Cube creates a terabyte of data. Ten percent of that is transmitted by satellite to universities and scientific institutions around the world. The rest is stored on tapes and hard drives and transferred physically in the summer.

Diesel generator: “We use a regular generator with AN8 fuel; it’s the fuel aircraft use,” says Finley. “We take the waste heat from the generator by circulating glycol through it to increase the temperature and then use it to heat the rooms and the water we use.” The temperature in the station is kept in the low 60s. When we spoke in late May, the temperature outside was -90F. Everyone is allowed two two-minute showers a week. Finley says they use less than 30 gallons of water per person every day; the average American uses three times that much.

Hydroponic greenhouse: “We operate it on a volunteer basis,” says Finley. “During the winter, it is our only source of “freshies”—that’s what we call fresh fruits and vegetables. When it’s fully operational, we harvest about 30 pounds of vegetables a week.” Among them: cherry tomatoes, lettuce, kale, zucchini, eggplant, and bell peppers. Finley says there are also a few jalapeño plants and a single strawberry plant.

Betamax players: “I think we’ve probably got the highest density of working Betamax (SNE) players and videos down here of anywhere in the world,” says Rees. “We also have a few movie traditions. We watch The Thing after the last flight of the summer. In midwinter we watch The Shining—and at the end, ConAir.”

Internet: “Our internet connection for personal stuff feels just a little faster than a 56k dialup modem,” says Rees. “One of the main satellites providing the connection is GOES-3, which was launched in 1978 as a weather satellite.”